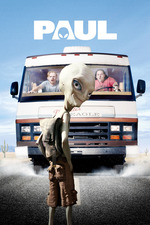 This movie is all about 2 movie buffs and best friends who live and travel in an RV. They travel to Area 51 where they discover an alien named Paul in their path. The friends pick up the Alien and make it their mission to return the Alien back to his planet safely, however it is made more difficult because there is multiple people chasing after Paul to recapture him.

This movie is absolutely crazy, it is so bizarre but it works. Some of the most random things occur in this movie, it is childish comedy at times, but also adult humour, this movie is brilliant. It helps having an excellent variety of comedic actors who all give great performances. Unsurprisingly Simon Pegg and  Nick Frost are great in this movie as 2 best mates and comic book geeks, they have a great chemistry and added to that Seth Rogen is brilliant as the voice playing Paul. Paul comes out with the most random and often inappropriate comments and remarks but you don’t expect it which is what makes it funny. The script in the movie is really good and helps make such an entertaining movie from beginning to end. This movie reminds me of the likes of Game Night and Superbad which the similar tone and comedic style with a twist or two to make it more unpredictable. My only weakness this movie has is a slight issue with the pacing as it is a little slow during the middle phase.

Overall I’d rate this a 4 ⭐️ movie and would recommend giving this a watch if you are into comedy movies. This is fun, entertaining, buzzard and unpredictable all at the same time, give it a watch.