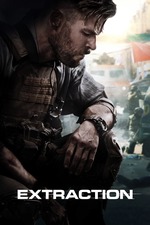 From Thor to Fat Thor and various roles in between, Chris Hemsworth has never been shy about using silliness to subvert his god-like good looks. Drawn like a Times Square caricature of an Abercrombie & Fitch model, the Australian star has always been willing and able to shape the absurdity of his sex appeal into the punchline of a joke that we’re all in on together, or at least use it to suspend our disbelief in a cartoonish movie world that would otherwise be impossible to accept with a straight face. (See: “Blackhat.” No, really, see it — it’s good).

In that light, it’s pretty tempting to laugh when the hot but haunted mercenary Hemsworth plays in “Extraction” is formally introduced during a scene in which he’s roused from a drunken stupor on the edge of a cliff, jumps off a skyscraper-sized waterfall that’s high enough to horrify lesser men, and then sobers up by meditating at the bottom of the lake. When the character’s name is revealed to be Tyler Rake — too generic for a spit-take, but too ridiculous to swallow — there’s reason to hope that “Extraction” is only pretending to be a serious action film with the soul of a paperback thriller, and that the Russo brothers have actually convinced Netflix to shell out a small fortune on some kind of stone-faced “Jack Reacher” parody.

Alas, self-awareness proves not to be one of this movie’s small but potent handful of strengths, and hopes of Hemsworth being able to charm his way through it are almost as short-lived as the hundreds of faceless henchmen who Tyler Rake slaughters over the next 100 minutes. As the simple premise of “Extraction” snaps into view, even the relative complexity of a Lee Child novel begins to seem far out of reach. By the time the first act crescendos with an 11-minute long-take in which Rake murders enough people to be considered a liberal hoax, this visceral but derivative shoot-em-up has reduced itself to something of a watered down cross between “The Raid” and “Man on Fire,” with little hope of claiming any clear personality of its own. With Hemsworth boxed in by a movie that won’t allow him to have any fun, the only real consolation here is that director Sam Hargrave takes the action as seriously as he does everything else.