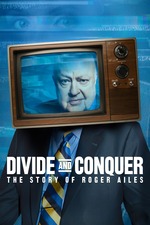 The latest in an infinite parade of documentaries about how the hell we got here (others include “Get Me Roger Stone” and the forthcoming “Watergate: How to Stop an Out of Control President”), Alexis Bloom’s “Divide and Conquer: The Story of Roger Ailes” is a clean and straightforward account of how a hemophiliac from small town Ohio grew up to become the most powerful man in media, effectively destroy the country that he claimed to love, and harass a whole lot of women along the way.

Fleet, lucid, and very watchable, the film is as ruthlessly effective and goal-oriented as its namesake, as Bloom (“Bright Lights: Starring Carrie Fisher and Debbie Reynolds) unpacks a singular American life with plenty of color and little creativity. Her uncomplicated approach serves the purpose of a film like this: When the legend becomes fact, print the legend, but when the facts become legend, you might as well just roll with them. What deeper truth Bloom mines from Ailes’ ignominious life is self-evident, but worth explicating nonetheless — Ailes and Trump (and Charles Foster Kane) are men defined by a kill-or-be-killed mentality. They’re cynical, craven men for whom power is the only object, every relationship is purely transactional, and love is a compromise they can’t understand. At least Kane had the decency to spend his final years in isolation.