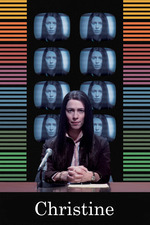 The two knocks I heard on this, before watching it, were that it was exploitative and that it didn't have a strong sense of place.

The second critique makes no sense to me: This is a very evocative picture of small-city America in 1974, when suburbanites were white-flighting to the sunbelt and when a ticket to a TV job in Baltimore was as prized as one for Willy Wonka's factory. ("That's a top 30 market!")

The first critique? I get it. The irony is that Hall is so goddamn good in the role that she makes it feel more exploitative, more like you should turn your head away.

For whatever reason, despite being tall and gorgeous, Hall got typecast for a while as the smart friend of the girl who gets the guy. Here, she plays the would-be star of her small station ("you're the smartest person here," the manager tells her) who is pursued, half-assedly, by the crush-worthy anchor, and who is incapable of becoming happy, whether it's flirting back with that anchor or taking care of the abdominal pain that's torturing her for the whole first act. Hall doesn't glam down. She retreats, approaching every human interaction as a crisis to navigate around, or an opportunity for the story that will advance her career and make all the suffering worth it.

We know how this will end, we expect her to fuck up on the way there, and it is absolutely devastating to watch someone with this much potential succumb to her mental illness. The cringiest scene may not be one of the showpieces, but a moment early in the movie when Chubbock, lonely at a bar, introduces herself to a cuddly married couple, transmuting her pain and envy into a not-convincing pitch to put them on the air for a human interest story.

Is it unfair to Chubbock to turn her life into this story? Maybe; there's a good reason nobody's turned around a Budd Dwyer biopic. But it worked for me, joining "Monster" in the small but fine genre of films about doomed Florida women.