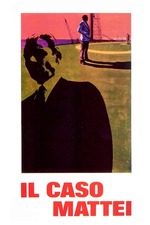 The Mattei Affair is an intriguing real life mystery, rooted in conspiracy and international politics. It is beautifully shot and edited with intensity. The explosive opening, with its fast pace and unnerving music, sets the stage for a Citizen Kane style story, looking back on the life of a powerful dead man. It's a circular, non-linear movie, cutting through time to discuss and examine the lead as well as his impact on the world. Mattei is presented as a man who shaped post-war Italy and one of many who helped rebuild the economy to create the Italian Economic Miracle. He is shown as someone willing to take fascist relics and use them instead to help the people, in this instance by nationalising control of oil. The post-war philosophy of the West was leaning towards state-controlled wealth, and Mattei was one who pushed Italy towards that. He made enemies and he called out oil companies intent on creating oligarchies that leave nations powerless. He disturbed oil monopolies, permanently shifted international oil markets, and challenged both Anglo-American oil supremacy and French colonialism. He had popular support but powerful enemies, so had to play politics and get the media to back his narrative.

The Mattei Affair presents all this with a sense of admiration, though it's not necessarily uncritical. The presentation matches that of a docudrama at times and it is a film built on realism even as it descends into hypotheticals. Oil controls the world balance and the whole world therefore depends on a few billionaires. The Mattei Affair presents this situation as one that need not be permanent and one that should be challenged. As the film came out just before the 1973 Oil Crisis, it presents a view on oil that was very soon about to change. However The Mattei Affair holds up as a dissection of 50s and 60s oil politics, and remains remarkably engaging despite the dry subject matter. It's a film that looks at and questions the distribution of power, all packaged together in a gripping concoction of history and conspiracy.