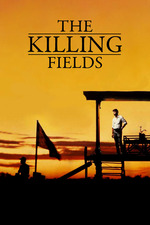 For me cinema should be more than entertainment. Cinema should help us grapple with and understand our history. The Killing Fields is valuable because it captures the Cambodian Genocide, which is something the world has not reconciled with. The film is unfortunately not from the Cambodian perspective, but still, I am glad The Killing Fields exists.

Forgive me for not discussing the film straightaway. I feel the need to re-iterate history before writing more, because The Killing Fields is incomplete and should be placed in context. The Cambodian Genocide is a haunting and almost inexplicable event. It was perpetrated by the Khmer Rouge who ruled Cambodia in the late 1970s. In 4 years, at least 1.5 million people were killed, which was approximately 25% of Cambodia's population. The Khmer Rouge rose to power after winning the Cambodian Civil War, which spilled over from the Vietnam War. Western involvement in the Cambodian Civil War is rarely discussed, but the US fought on the losing side. The US carpet bombed Cambodia, which the Khmer Rouge used to gain support. With the Khmer Rouge victorious, they evacuated all of Cambodia's major cities and forced the population into an agragian lifestyle. They had a distrust of intellectuals and a dislike for those from urban settlements. They wanted an unquestioning, peasant population and the genocide was a consequence of that. One could say this is the most evil and catastrophic social experiment in history, if we were to even dignify calling it an experiment. The Khmer Rouge used desensitised and indoctrinated children as soldiers. This dehumanisation is part of the evil of the Cambodian Genocide, because many of the perpretrators were themselves exploited children. The layers of evil here go beyond comprehension and are probably unimaginable for us Westerners living in comfort.

But let's briefly move into the international reaction to the Cambodian Genocide. For socialists such as myself, an act like this has to be reconciled. There are questions here which cannot be avoided, about how strands of communism can manifest in such evil. The context of the Cambodian Genocide comes from international communist tensions, notably the Sino-Soviet split. China backed the Khmer Rouge, while the Soviet Union did not. In post-1975 unified Vietnam, the communist government there was backed by the Soviet Union and not China. The West therefore de facto aligned itself with Cambodia, in order to oppose Vietnam and the Soviet Union. The Genocide was ended not by the West, but by the Vietnamese successes in the Cambodian-Vietnamese War. This is how all this context relates to The Killing Fields. The Cambodian government when the film was released was aligned with Vietnam. The Khmer Rouge were a government in exile. The Killing Fields is a British film, but prime minister Margaret Thatcher openly recognised a coalition containing the Khmer Rouge as the legitimate rulers of Cambodia. This was despite them being ousted and despite the fact that they murdered almost 25% of the Cambodian population. In fact, the UK, the USA, and China all recognised this coalition as the legitimate rulers of Cambodia during their guerrila fighting against the Vietnamese-installed government. Margaret Thatcher said in 1988 that "the Khmer Rouge will have to play some part in the future government". The British SAS helped train soldiers in the Khmer Rouge's coalition and the US aided groups in this coalition, with contradictory reporting as to whether US aid went to Khmer Rouge members themselves. So remember, when The Killing Fields was released, the UK, the USA, and China were helping the Khmer Rouge retake power in a new form. It was politically convienent for the West to support this deposed Chinese-backed regime and extend the Cambodian-Vietnamese War, so we did. Nobody gave a shit about the Cambodian people, and the aid to genocide enablers didn't stop after this film. The West didn't care and don't let the existence of The Killing Fields convince you otherwise.

Now onto the film. The Killing Fields is heavily flawed, but not without merit. It has a naturalism to its world, which is important. It's also undoubtedly a depressing experience, being more honest about the bleakness and consequences of war than most Western films. The opening scenes contextualise the state Cambodia was in that allowed the Khmer Rouge to take power. It's a forceful reminder that America made the choice to bomb civilians (which it does to this day). The scale of destruction is massive, and one could say it feels like Apocalypse Now in Cambodia. It is a film of blood and tears and screams. It asks us what the role of a journalist should be, as they photograph and observe death. What The Killing Fields presents is a sense of chaos and hopelessness, as Cambodia entered an uncontrollable death spiral.

The Killing Fields is a film built on its worldbuilding, its recreation of Khmer Rouge Cambodia. As a story however, everything is presented in bits and pieces. This complicated event is caught only in parts. Though the most shocking and horrific part, of the discovery of the titular fields, is as disgusting as it should be and incredibly effective. Mostly the story fills itself with forced moments, as everything is edited and written to maximise the emotional impact. Still, the power lingers, so the dishonestly can perhaps be forgiven. Though we must remember that The Killing Fields is an isolated take on history, following people in a unique and unusual circumstance. Most of the lead characters are foreign journalists and not Cambodian people. This should be the story of Cambodian journalist Dith Pran, but it isn't. Both his capture and rescue are contextualised almost solely on how his American colleague feels about it. In general the film focuses on specific, dramatic events and not the real details of this catastrophe. It even manages to centre on English-speaking Cambodians, which is hardly representative.

Finally, I have an issue with the music. It's often overbearing and overdramatic, sometimes feeling more silly than tense. More egregiously the film ends with John Lennon's Imagine, which is the most tacky thing. What is there to dream about and be positive about in this scenario? The Killing Fields playing Imagine while the West was de facto aligned with the Khmer Rouge is just icky. There was a genocide, ended not by the West, and instead of suggesting practical solutions to stop Cambodian suffering, you're just going to play a song about imagining a better world? Playing a song rather than advocating for our governments to stop helping mass murderers is ridiculous. How many Cambodian lives are improved by a Western movie telling other Westerners to "imagine all the people, living life in peace"?

The Killing Fields is an important film. By itself, it is a strong piece that shares vital history we must learn from. It is a nightmarish work that tells its story well. There are some qualms to be had but it is mostly solid as a film. In the broader historical context, the film is incomplete and does have failings. But nevertheless I must commend the film for telling the story it does, for openly questioning Western involvement in South-East Asia, and for creating a powerful experience that emotionally devastates.

Side-note: If anyone has suggestions for films or reading materials about Cambodia and Cambodian history, I'd love to hear them.