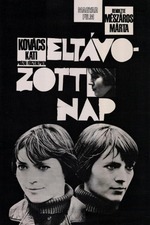 The Girl is such a 1960s film, existing in a new era of liberation. The technique, from the opening credits to the ending, scream 60s European art film. The distinctly modern opening credits are flashy, stylish, and minimalist, complete with a cool soundtrack. The Girl is itself about modernity and tradition, examining cultural contrasts between Budapest and rural Hungary. Even though 1960s Hungary, as well as the world at large, was moving forward, the traditional still existed in parts of society. The Girl spends time in the simple living of rural existence, finding an outdated patriarchal structure that sits awkwardly with our modern lead. Everything seems different, even dancing becomes a contrast of cultures. There's the contrast of rural and urban, young and old, the suppressed and the liberated. The Girl also presents television as a transformative reality, bringing the world closer together and crossing barriers. Yet there exists even less barriers in the city, where views on sexuality and culture are more liberal. Pop music plays, exotic posters are stuck on walls, love is given cheaply. The Girl is about a woman navigating life, given freedom but limited by loneliness and work. To be young is not necessarily to be happy. She finds herself unsatisfied with men in her life, embarking on some cold relationships. However The Girl finds also closure, friendship, and kindness. It's not a cynical film, despite its look at social complexities and backwardness. Visually it looks plain in a sense, but has some incredibly fluid shots. The compositions are amazing. The Girl is a realist film made with skill and mundane beauty, telling a simple story that speaks to an era of change and the generations that lived through it. A quietly remarkable work.

Dancer in the Dark