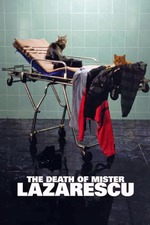 The Death of Mr. Lazarescu

The Death of Mr. Lazarescu is one of those films which seems totally unique. It's a film executed in a special way, drawing on intense realism and finding the darkest possible comedy in unaccomodating healthcare procedures. The story follows a sick man taken to hospital, only to be continually moved from hospital to hospital, doctor to doctor. Through bad judgment, changing priorities, and just being unlucky, he ends up continually unable to get treatment. A kind paramedic sticks by him, only to be insulted and patronised by the doctors. The film draws on heavy repetition, with the same questions asked and the same assumptions made over and over. It's a chaotic slice of constant frustration, as our lead slowly deteriorates but little can be done.

In any healthcare system there are limited resources and The Death of Mr. Lazarescu shows the impact on those unfortunate enough to not be considered an immediate priority. But the line must be drawn somewhere. While the film raises questions about how healthcare is organised and prioritised, it's fairly clear that the preventable failures here mostly derive from kind-hearted people with limited time and resources. Even the minority of characters who seem quite uncaring are themselves under stress and pressures. This brand of nihilistic absurdity may not leave us smiling, but seeing the limits of giant social organisations presented so realistically feels quietly reassuring since someone else understands. There's no Hollywood ending in reality, creating a perfect healthcare system is impossible. Though that doesn't mean we shouldn't fight for improvements.

The Death of Mr. Lazarescu is an indictment of the perversity of modern social systems, that accept futility and failure. Such systems accept that people are caught between the cracks and left without dignity, much like the lead here. The dilemmas in The Death of Mr. Lazarescu have no easy answer, so instead the film turns them into deadpan comedy. It may seem initially an unengaging film, but as it moves into incrementally more unfortunate circumstance, it becomes more exhilirating and watchable. There should be nothing to laugh at, but the shocking believability of the farcical situation leaves only poker-faced humour as relief. It's a cynical piece of cinema, but brilliantly done and oddly hypnotic.