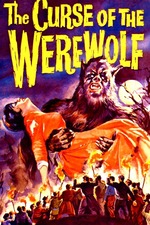 The Curse of the Werewolf

The Curse of the Werewolf is a pretty good Hammer film. It delivers some goofy fun, but also has some darker themes. It has a rather unusual setting for Hammer, being set in Spain. Though Spain in this context means very British countryside and a bunch of English actors saying señor occasionally.

The Curse of the Werewolf has a real scale to it, unlike some Hammer films, and becomes a small epic through its winding, complex narrative set over many decades. Though it must be said that the film gets worse as it goes on, becoming more predictable. The finale's pretty cool though. The peak of The Curse of the Werewolf is probably its prologue, which features a sadistic marqués and some humiliating moments. It seems rather pointless in the grand scheme of the narrative, but that opening act is Hammer really embracing human darkness in a rather chilling yet entertaining way. In fact The Curse of the Werewolf is really able to tap into something that Hammer and director Terence Fisher liked to explore, namely the depiction of the supernatural as some kind of disease afflicted on suffering peasants.

The Curse of the Werewolf mostly works in shallow ways. The large cast generally play small roles without arcs, but they all fit into likeable Hammer archetypes. Many seem cast for their good looks rather than their talents however. While there isn't actually much werewolf action in the film, the makeup and costumes are pretty impressive, as is the production design. The Curse of the Werewolf is a silly, dumb movie, but it is enjoyable and generally respectable.