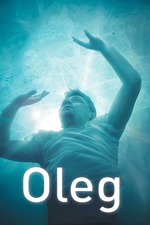 Oleg is a slice of social realism that captures interesting parts of the modern European experience. This interconnected continent is one of a migrant life, many going where work takes them. Oleg is about a man looking for a new life, travelling abroad for work. His labour is necessary for the system to function, so he is needed. Allusions to passports and immigration remind us of the blend of nationalities that have merged together in this Europe. A cat called Brexit is mentioned, perhaps a reminder that not all is unified. From its broader setting Oleg settles into a series of misfortunes, with the titular lead becoming powerless and coerced into an exploitative situation. The film is a collection of parts, almost an odyssey of the different people he meets. Most notably he descends into a world of crime run by an unpredictable and controlling man, one whose existence has created an erratic cult-like prison. Oleg has a sense of tragic humour, as everything goes wrong and our lead finds nobody to believe his tale. In his quest to find a place to fit in, he ends up alone. There are images of him suspended in water, unable to see God and in need of an escape as he tries not to drown. It's a nice recurring metaphor for the entire narrative. Oleg doesn't break any new ground, with its constantly moving camera and immigrant story commonplace in European realist films, but it does offer a compelling plot executed well. There's a lot of value here, if little original.