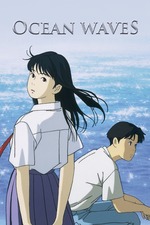 The least known film by Studio Ghibli, Ocean Waves is a brilliant little film from the anime powerhouse. Made as a TV movie by the studio's up-and-coming animators, Ocean Waves is a simple film far removed from Miyazaki's fantasy adventures. Instead, Ocean Waves is a high school film about a love triangle between two friends and a girl who transfers to their school.

What makes Ocean Waves work is just the quiet, confident nature at which the story unfolds. We get a slow, developing sense of who the lead characters are and feel their teenage angst, awkwardness, and affection. It's a film which is relatable, funny, and awkward, and often all three at once. The story is nothing mind-blowing but it is sweet and touching. I was endeared by the story and the cooking pot of emotions the film would slowly develop. It started off so unpromising yet by the final act, I was genuinely invested in the events unfolding. I expected this to be one of Ghibli's weaker efforts but it's actually better than a good few of their films, although it's far from their best.

There's a parallel between Ocean Waves and Makoto Shinkai (5cm Per Second, The Garden of Words, Your Name) and it just solidifies my problems with Shinkai's work. Ocean Waves and Shinkai's films often share similar themes such as the difference between rural and urban Japan, high school drama, and a romance spread across a long time period (*SPOILERS* culminating in two characters seeing each other after a long time, realising they're in love, and staring silently at each other as the film cuts *SPOILERS END*). However, unlike Shinkai's work, Ocean Waves never becomes cheesy or cloying, and never becomes pretentious. Ocean Waves is a film whose visuals are obviously fake, but whose characters and story are fundamentally realistic (the antithesis of Shinkai). It succeeds because you feel what the characters feel, and understand what the characters understand, and there doesn't need to be a greater meaning than that.

Ocean Waves is a beautiful little film that admirably exceeded my expectations. It's simple and uncomplicated, without much ambition, but it succeeds with grace and skill. A little imperfect perhaps, Ocean Waves is nonetheless an under-rated Ghibli gem.