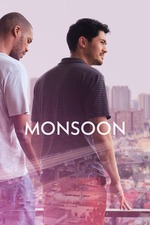 Monsoon is a waste of a film. Specifically it wastes the good film obviously hidden within it.

This feels like something likely personal to the director, but unlike the recent film The Farewell (also about an immigrant returning to their native Asian country as an adult due to loss) Monsoon is torn in loads of directions and never finds what it is best at. It is simultaneously a queer romance, a story of family, and a film obsessed with picking apart history. In most aspects it approaches these strands in bland, safe, standard ways. It is heavy-handed and clunky in every conversation.

It's also worth saying that Henry Golding, who showed skill in Crazy Rich Asians, is poor here. He appears incredibly one-note and robotic. This is probably what disappointed me most.

Monsoon is something that tries to be artsy but has nothing to say. Barely anything happens and it's a mess. It's decent enough to not leave a bad taste, but it's so average that you'd almost rather it was bad.