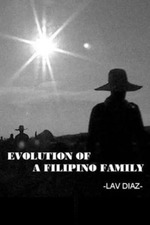 Why is it that really long films tend to be so good? I think it's because they tend to be comprehensive and take the time to properly explore their themes and ideas. Any director who expects their audience to sit and watch a film for so long clearly assumes their audience expects to be challenged intellectually and emotionally. Lav Diaz knows this more than most, judging by his love for long cinema. Evolution of a Filipino Family is such a long film that 3 hours in you still have the length of Sátántangó to go. It is a singular experience to say the least. It is so incredibly slow, as the camera often doesn't move and often nothing will happen for a long period of time. There seems to be half hour pauses between events. But the reality is our own lives are slow. What would I see if I watched you all day? This kind of slow, extended cinema reflects reality back at us, regardless of whether we want to see a mirror held up to our faces.

Evolution of a Filipino Family is somewhat amateurish at times. It is often not spectacular in technical proficiency. The shoestring budget is obvious and the quality clearly switches between high quality film and video camera footage (which often leaves the characters lost in the background and poorly lit). Yet after the first 45 minutes, the quality does pick up. Whilst there is no music and the sound editing and mixing remains poor, there is something compelling about the realism of the piece. It seems like a miracle that Lav Diaz was able to make this film, given the obvious lack of resources. This is why we mustn't judge films solely by a technical checklist. Films like Evolution of a Filipino Family are meaningful and worthwhile cinema despite all limitations. Ideas matter more than skill. Money is not available for all filmmakers, especially in less developed countries. But nevertheless Evolution of a Filipino Family does have a style to admire. The minimalist production reflects the impoverished land. Diaz also manages to make the beautiful landscapes he films in appear ugly and human. He even manages to capture stunning images occasionally, such as many of agricultural workers silhouetted by the sun. The film is often in perpetual darkness, letting the night limit the screen to flashes and glimpses. The film was shot over many years and Diaz clearly gained more skill and resources. This also allows the film to detail a family growing up in a natural way. You don't need Boyhood when this exists, and Evolution of a Filipino Family has a more genuine intention to pass comment on the world. The storytelling is not always perfectly and literally linear, but the story is always moving forward. It does become hypnotic as the hours pass and the filmmaking becomes smoother. I did lose track of time at certain points. Regardless of what criticisms can be levied at the film, Evolution of a Filipino Family shows us a new way that cinema can be.

Evolution of a Filipino Family probably requires some knowledge of the history of the Philippines for it to make sense as a work. The film spans the early 70s to late 80s, placing it during the Marcos regime. It is about one family's journey, but that is symbolic of a country and a time. There's a quick montage in the first hour that sets the context briefly, but then the film goes back to the slowness of existence. History is just a backdrop to ordinary lives. Events that define nations are often just on the periphery of reality for most people. The film presents the collapse of a farming community, as an authoritarian regime takes hold of the country. It is the moral collapse of a nation, and the farming community is decimated by change. At first our characters have a relatively stable life and time for radio, but then they slowly lose everything. Despair slowly begins to dominate the film. Whilst the violence here never seems real, the emotional reactions to it always do. The fear of authority hangs over the first half. We hear gunfire richocheting offscreen, see soldiers in the fields terrorising their own people, witness the titular family get rounded up for information. This is not a good time to be young. Education opportunities are difficult and expensive. Wealth inequality, though the rich are only briefly shown, ensures an underclass will forever exist. Criminals are harshly treated, losing all respect from everyone, including their family. We see a man humiliated, tied up, and forced to wear to sign. His crime was being a thief, but he was a starving, desperate man. This is a film of a family losing all dignity. We see one spider eating another, a reminder that this was a country eating itself, so you could never let your guard down. Massacres were common enough that they could be casually discussed. The Marcos regime is presented as polarising within the film, even if the film does nothing but condemn it. The characters living in the urban areas are conflicted on the rights on farmers who suffered during these times, they don't consider how essential farmers are to the supply chain. Over 6 hours into Evolution of a Filipino Family we get a montage of archive footage showing the People Power Revolution and the restoration of a fair democracy to the Philippines. Slowly a seed of hope is eventually born again. In the final hours of the film, civilisation possibly rebuilds amidst new despair. We do get a field of gold by the end. In spite of everything, this family will go on living. The character of Raynaldo is depicted as a child, and then as a blossoming adult setting out into the world. We don't see the in-between. He is somewhat the inverse of pain, disappearing when the country reached it lowest, yet returning when the people restored freedom.

Evolution of a Filipino Family sprawls out across a large family over 16 years. We see many different forms of pain. Early on, we witness the hellscape of a city, with an abandoned baby covered in ants. Women are mistreated and judged, raped and left damaged. One of the film's most powerful scenes depicts the recording of a radio drama. There's something weirdly depressing about watching a voice actress in tears stood still but acting out a rape and abuse scene. It just feels callous, though obviously Evolution of a Filipino Family is not the callous one, but the fictional drama-within-the-drama. It's an obvious performance, so there's no real consequences, but the screams are so long and so disturbing as to be tough to watch. The radio in Evolution of a Filipino Family is a constant way that the characters get escapism. But even then there is no joy in the stories they hear. The radio is also all about damaged people and awful actions. Often the film makes it unclear what is radio and what isn't, as the sound plays as if events are happening in the same location, not being played through a radio. Either that's a radical filmmaking device, or just a technical limitation. Regardless, it has the effect of making melancholia feel omnipresent in these lives. These lives are filled with cramped conditions as bodies are pressed together frequently. Rape and murder are common enough realities that a young boy kills the men who raped and murdered his mother. Characters want better for their children but everything is a struggle. The film depicts a constant struggle to survive, as the cruel society reduces down to survival of the fittest. Kids handle corpses in this broken world. One major character has a slow, agonishing death as he walks, stumbles, and collapses for literally 20 minutes of screen-time, before dying on the floor only to get dumped with the other bodies. But even without death characters suffer. They have to take on new jobs, always more difficult and more degrading and less profitable than the last. One girl dreams of her mother constantly, through dreams the film presents as reality. She will never see her mother again. Another girl, still in school, is almost forced into an arranged marriage with a minister. Tragedy strikes these characters many times, in many ways. One is blind, another deaf, one has a limp, one is mentally ill. Nobody is spared pain. This is a film about the struggle of a poor family, and there is no comfort to be had. Their rural life gradually moves to an urban one. Which is to say that the first half depicts a corpse being dragged across grass, and the second half has a corpse dragged across concrete.

Evolution of a Filipino Family offers so much as a piece on Filipino identity. That very topic is brought to the fore with a fictitious interview with director Lino Brocka, which highlights Filipino cinema compared to bourgeois Western cinema. Now, I think it would be overstating it to say this film is flawless. In fact, the almost fourth wall break of these director interviews are rather on the nose in their critiques of the Marcos regime. The film could do without them and still possess the same themes. Similarly other sections are weaker than the majority. Whilst I was fairly passive for the first hour, after three hours I knew this was a masterpiece. But it does sag later on. Whilst the middle section is superb, the film starts to lag in the second half, even though there exists many amazing moments in those final hours, including some of the most impressive long takes of the film. For me, the film peaks from the second to seventh hour, and also in the final ninety minutes. The film splinters after the first few hours, and starts to spend a lot of time with just one group or person, then moves onto another after a long while, often about an hour or so. Like the characters, we end up waiting, just hoping for a reunion. So this is my warning that Evolution of a Filipino Family takes some determination to complete, and it is not smooth sailing from beginning to end. Yet, if you want to see a reality rooted in complex history and the greatest despair, Evolution of a Filipino Family is a unique masterwork worth all those hours.