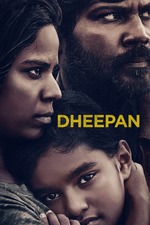 Dheepan is a really solid drama with crime thriller elements. It's fairly standard, but does everything well. Using immigration as its backdrop, Dheepan captures people who feel like they are not a part of their surroundings. For starters a language barrier creates difficulty when trying to fit in and understand a new world. Dheepan is also distinctly non-Hollywood, with the characters feeling real and not like some detached actors with fake dirt thrown on their face. It captures struggles that seem to really exist, most notably comparing violence in Sri Lanka and France, the film's settings. The modern France in Dheepan is shown mostly through a housing project and the drug dealers, gangs, and gunshots that are a part of that. These areas do seem a recurring setting in a lot of contemporary French cinema, in films like Les Misérables and Girlhood. Dheepan falls into a few predictable moments and it is not a deeply original film, drawing inspiration openly from other works. Its three strangers pretending to be a family fall into the inevitable romance and attachment one expects. Dheepan is not an innovative or exceptional work, but it has great visuals and a decent story. There's a lot to admire, though little to love.

Side-note: It's certainly interesting that Dheepan presents England as some kind of utopia for the characters. The finale presenting it as brightly lit and full of smiles, in a scene with inspiring music, feels quite strange to me. I can't tell if the film has severely underestimated the anti-immigrant sentiment in the UK or is presenting its version of England as some sort of fantasy.