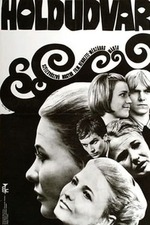 Opening with no music, just credits over widescreen footage of a plane landing, Binding Sentiments immediately sets the stage for the modern world it takes place in. The film becomes one of class and social boundaries, as young and old find themselves at odds. Márta Mészáros knew how to construct beautifully realist films and this intimate drama, often just a chamber piece, really rings true. It centres on two women, both strong and complex, dealing with a suppressed tension between them. They seek independence, in different ways. One is widowed, now free from a loveless marriage. The other wants love, and to find where she can be herself. Binding Sentiments depicts young people as liberated and criticised. A pop music soundtrack plays often. Yet the film also features bourgeois living, filled with fashion and high culture. There's a dichotomy to the posters on the walls in the house, ranging from communist leaders to well known bands. Everything in Binding Sentiments draws on this strange world of ours, where people are contradictions and illogical but we must still persist through life. It's a simple film, of talk and internal conflict, but feels quietly meaningful and ends up very watchable.

The Death of Mr. Lazarescu