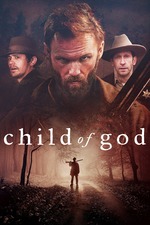 I wasn't sure that I should watch Child of God, since I didn't only love the book but also worship Cormac McCarthy like a demi-god. I haven't heard many positive things said about the film, but I finally couldn't resist.

Ultimately I would compare it to a pile of steaming runny yellow feces with a diamond buried in the middle. It was that diamond (which is named Scott Haze) that kept me watching past the five-minute mark. I mean, I was already in the poop. Might as well keep going.

Starting with the bizarrely ugly title sequence - appalling typography that is repeated in completely unnecessary and irritating intertitles - and the opening (pathetically stereotypical) banjo music, I felt an irrational anger at James Franco for this lurid mess. When I realized that he was attempting to salvage some of the lyrical voice of McCarthy by simply having a lame voice-over reading lines from the book, I started to feel sorry for him. He seems to have developed a fantasy of himself as an intellectual and artist that he isn't competent to live up to. Many of us have grandiose delusions, but it's bad luck to have to work it out so publicly.

Unimaginative music, hideous titling, and distracting voice-over aside, the main problem with this movie is the plot itself. Although the book is a short one, obviously it would take at least a few hours to depict everything in it. Franco's choices regarding what to include - and it's all pretty much verbatim scenes from the novel, until the ending - are lamentable. The screenplay robbed this illustration of a man's descent into a primordial hell of any sense of progression at all. Lester's crimes are even mostly glossed over, which I suppose is a good thing given the happy ending that I never saw coming. You know, I could have been okay with that if the film seemed to have anything of its own to say.

Now for the good part - Scott Haze, who I hereby dub "The best thing ever to happen to a literary adaptation in film." Un-fucking-believable, this guy. I have a confession to make, here on Letterboxd. I don't much care for actors. I'm a huge cinemaphile, so obviously I'm glad we have them; but I don't think of them as artists. They are the people who hold up the art so we can see it. Many actors are a lot of fun to watch because they have a certain charisma or physicality that is entertaining or sexy or moving - but that doesn't make them insightful or creative. But. This. Guy. The point of the book is that Lester Ballard - as repugnant as his actions are - IS a "Child of God." This isn't irony, you truly have to be able to love Lester if you are going to "get" McCarthy. I expected the characterization to be the weak point of the film - nobody can really personify that kind of filth and degradation, make the audience confront it with their own eyes, and also reveal the damaged human soul inside. Who could possibly act like Lester Ballard and still show us why the man is a child of God?

Scott Haze. He made me weep like I did while reading the book. I might be in love. At any rate, whatever he does from now on you can just count my ticket as already sold.