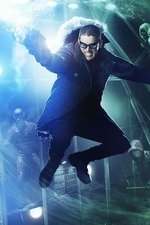 This one I’m going to do two more because these shows had an involvement with the Superhero fight club short film (the second not the first). It might not count but I since Captain Cold is on the cover of this one I believe it does.

Supergirl: While CW was dominating with Arrow and Flash, CBS took a chance by doing a show based on Superman’s cousin. At first I’ll be honest, it didn’t grab me. It was kinda like the Flash being a bit more lighthearted and fun, but later seasons after its move to the CW really got me into it (and that’s not including her becoming part of the Arrowverse). Kara on her own is amazing, half the time being fun and innocent as the Flash, but takes her situations seriously like Arrow. It’s a good mix that really gets me invested. I also love the recuring cast like her sister Alex, Martian Manhunter, Lena Luthor, even Brainiac 5 is fun with his story. It’s a shame she’s on her final season as I would have love to have her story continue. This Supergirl at the moment might be the only current successful live action version.

Last thing: Jon Cryer pulls off an awesome Lex Luthor. I will fight you to the death on that.

Legends of Tomorrow: This show is definitely the living proof of the concept of shared universes. Legends tells a story of a team dealing with issues across the infinite stream of time including anomalies, historical people in wrong places and even demons. The show starts with cast members from Arrow and Flash and a few newcomers, but with each passing season characters either leave or die and are replaced by characters just as fun as the originals. Some characters I loved like Sara, Atom, Heatwave, even characters so random they just blend in well with its plot. But one character I feel works oddly well is Constantine. Joining in after already being established in his own series, Constantine becomes an interesting regular keeping his character. It’s also another for Matt Ryan, the only person who truly is Constantine, to keep playing the character. It got really weird after season 3 which I think worked in the shows favor, keeping it unique enough to survive on its own. This has to be one of my favorite CW shows, keeping its formula the same while consistently shaking it up.

These along with Arrow and Flash were the original four shows that started it all and were the ones that crossed over the most. But again there are more shows to discuss like Black Lightning, Batwoman and even Stargirl. But again, I don’t want to drag on about each show in one entry. I’ll find something to use to talk about them hopefully. If you haven’t seen them yet, I say give it a shot. You might be surprised with what you get.

Scary Stories to Tell in the Dark