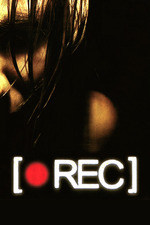 I'm just going to start off by saying that this was flat out horrifying, now it ain't too much of a challenge to get me scared but this one film had me horrified. And I love just how real it felt, small details and moments really added to the immersion, which just makes the actual horror even more intense when it does pop up, honestly it's crazy how Quarantine was a near shot-for-shot copy and still managed to capture the type of spooks and scares that this one had. This film is directed by Jaume Balagueró and stars Manuela Velasco,Ferran Terraza,Pablo Rosso,Carlos Lasarte,David Vert, and Jorge Yamam in this film that is near-perfect when it comes to the genre of horror, and easily one of the best things to come out of the "Zombie" genre, and also a contender for being the best found-footage film ever (this film is just that damn good). Lemme just say that the characters made this movie so watchable, they felt very real which made the whole experience that these people go through feel very plausible, every reaction and moment with these characters feel authentic in the best way imaginable. Shaky Cam has never been so good and it just adds to the chaos that ensues, instead of it being a distraction it was given a proper purpose. With an incredibly short runtime this film covers ground that works well with the pacing & structure of it all, not a single moment is wasted. And for the 15-20 of build-up given to the film it manages to make the big reveal of the infected Mrs. Izquierdo so much more impactful then it would've been had they gone in and rushed things. I absolutely adored Manuela Velasco's performance in this film, with what could've been over-the-top turned out to be a rather contained and realistic performance that sticks with you by the end of it. Also lemme just say that the jumpscares in this film absolutely hit in all of the right ways, and I was definitely spooped. What really did get to me though was the final 15 minutes, the whole finale was just nightmare fuel and it has one of the most disturbing,creepy, and unnerving moment(s) I've seen from any horror flick, and the reveal was just sooooooo good, literal perfection. There literally isn't anything to say that hasn't been said already, it's a classic amongst the horror, found-footage, AND Zombie genre that doesn't hold back from giving a good spook. So yeah, I'm sure you've all heard a lot about this film...which is why I HIGHLY recommend you give this a watch if you haven't already, you'll find yourself (hopefully) loving this one for sure.