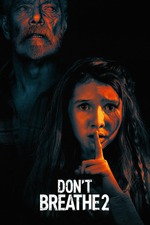 It's definitely disappointing to see how this film turned out, not that it's entirely bad or anything like that...it just doesn't get the spirit of that first film and ends up missing the mark on what made it so special. And even then I still feel as though this film should've never happened, the one film we got in 2016 was enough for me, to make things even worse is that this is probably the most basic way of continuing the story imaginable. This movie is directed by Rodo Sayagues and stars Stephen Lang,Madelyn Grace,Brendon Sexton III,Fiona O'Shaughnes,Stephanie Arcila,Rocci Williams,Bobby Schofield,Adam Young and Steffan Rhodri in this film that just did not work for me sadly, there's still good in this flick but it's hammered down by so many flaws that could've been prevented. I'll start off with the stuff that I liked about the film cause there's still a handful of that thankfully. Stephen Lang's performance as The Blind Man is once again fantastic and a true look at his range as an actor, the dude is just believable in every way and you feel it in his performance. Now it was weird to root for The Blind Man this time around...BUT it's not like his past sins were ever redeemed in this film, it acknowledged that he was and is a messed up person, so there's that. One of the biggest surprises in this film lies within Madelyn Grace's performance, she genuinely surprised me and was somehow one of the better members of the cast in terms of the performance brought to the table, she was excellent and I hope her career continues on after this. Action was cool, the gore presented looked solid whether it was practical or CGI. Pacing was good, nothing felt too uneven and due to its short runtime it managed to breeze by rather easily. So there's a handful of things that really doomed this film from the start, one thing I can say right away is that it's not as compelling or as strong of a story as the first film, this one ended up being a "basic film". And it's not just that, but the technical aspects feel so downgraded that it's hard to even ignore. The whole thing feels so cliché and dull that it ends up feeling so uninspired, which is upsetting cause you can see the cast trying to do their best with the material given to them. And even then, the cast as a whole is filled with some weak performances, but I'd still like to put some of the blame on the script. There's a couple of twists here and there during the third act but it allows for some ridiculous moments that are just too odd to be taken seriously, all sense of reality just leaves the window and makes the final act such a mess, and the execution of the ending was incredibly weak. So yeah, considering how much I liked the first film, it just about breaks my heart to see how much I disliked this one. If you liked the first film then I'd say you skip this one, it just doesn't compare well at all when going up against that original film. Not recommended.