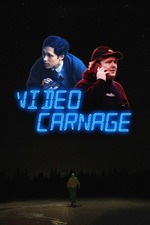 Video Carnage is a film that not only elevates the craft of Doomed Productions but brings out their style in a mainstream accessible way. When watching this film I couldn't help be reminded of the directing and how talented Jordan and Ethan both are. A comparison I feel makes sense is the work of Christopher Landon, doomed productions takes what could be just a dead serious idea an injects it with some much needed comedy. So many directors despise comedy and try to go for the only dark and gritty aesthetic which is overdone to death. What these guys were able to pull off is no short of a movie making miracle and we need to give praise to the fact they have the talent to pull this off in only 2 MONTHS. When the credits rolled I felt I watched something on the quality of a big budget Hollywood release. Within the folk filmmaking movement there is an obsessive attention to naturalism and realism (I would know because that is the type of work I make) but its immensely satisfying seeing something more in line with a traditional Hollywood fare but done in a unpredictable indie film package. I can't stop thinking about the film. It burrows into my mind like parasite infecting my brain with the power of a popcorn munching great Hollywood quality experience you usually only get at the MOVIES.

So lets get into specifics because I think there is a lot here I want to talk about, theorize on, and even look at with a more critical eye. I think Doomed Productions has made a great great film here! But I think this film deserves the respect of a real review that might have a few brief critical thoughts. First this movie is really funny, so many times did I find myself giggling or laughing at the small simple stuff, when Jordan fist pumps when landing the client I knew exactly that emotion. I've dealt with wedding video clients so I know how hard it is to land clients over the phone. This comedy lands really well and keeps the tone of the film from ever dipping into monotone, dark, or joyless. There is a real love of the 'adventure' in this one. You can tell Jordan's character Mike loves being thrilled into a dangerous situation and even the character of Sam seems to be alive when the pressure is on. The story is concise and well told. I could totally see a 3 hour version of this which goes into the complicated backstory of our serial killer, explaining and giving him a tragic backstory perhaps. But luckily doomed productions keeps it light and breezy. We know his motive. He's a crazy killer and that is all we need. Although I do have my theories on if there were 2 killers (there definitely is a second unknown killer btw). Just look at at the opening scene and tell me when he stares the camera down in the mask giving a glare, you can clearly tell the camera is being handheld, who else could be filming that when Ethan is tied up. Assuming I'm totally wrong, than that is great sequel fodder for the next film. The aspect ratio change really suits this story well, I'm usually very annoyed when it comes to stuff like that, I usually like one ratio for an entire film. So that stuff typically bothers me a bit mostly cause it brings me aware of the process of editing which I think should be invisible, but in this film its actually handled brilliantly. Each time its done with a clear intentional purpose that doesn't feel distracting but elevates the material quite a bit. Doomed Productions seems to get how to do aspect ratio changes better than literally any other filmmakers I know.

So lets move deeper into the acting. This is both the strongest and weakest element to this film. First of all Jordan delivers a well thought out and great performance as our lead Mike. Everything feels intentional and the acting is a step up from October which was Jordan's last full length acting role. I really love the character of Mike especially how specific and routine his life is. With our main baddie we have a weird mixture of compelling creepiness and flat bad guy acting. There are moments where Im genuinely terrified from our baddie, but sometimes it seems the acting goes flat (particularly when trying to choke Sam in the yard). This uneven performance only slight harms the film mostly because there are so few words even spoken by him. Finally we get to May's performance. This one was the most divisive to me. The performance is actually 1000 percent solid throughout and clearly May can act as evident by the third act but that brings me to the only real problem I have with this film... The Dubbing.

The dubbing especially in parts of the first half is pretty rough, the mic quality seems unfortunately a bit unclear specifically on May's voice. I don't know if this was a mic issue or a performance issue, but consider May's performance is fantastic in the third act where the most real camera audio seems to be used I think this might be a mic/clarity issue. I had trouble making out a few parts of what May said and it did bring this film down from a 13/10 to a 10/10. I really fucking love this movie and I wish more time could be spent with the audio. I feel Doomed Production has it all together, but the dubbing does hold back the fantastic material. Luckily I'm a filmmaker and I've dealt with dubbing so I know the nightmares and know its not easy, so this is not a critique without sympathy. If I would suggest anything, lose the ADR on the next project shell out 1k only 500 a piece and buy the f8n zoom recorder as well as a cheap ntg2 or ntg3 microphone. In the long run you don't want to be Adr-ing every project unless its an aesthetic choice, I think good clear sound that feels apart of the world would really do this film wonders. (I'm only talking about voices all the other sound effects are fantastic and great.)

Now that my least favorite part is out of the way lets talk about why I love this film and why its STILL my favorite film of the year. First of all the cinematography work by Ethan is so fucking good it kills me. (I would legitimately want to work with Ethan on a feature film one day using my sony camera). Second the editing in this film is by far my favorite edited film ever released by the folk filmmakers. I'm including my own work which I have a high opinion of haha. Truly you guys popped off with the editing. The story is gripping and engaging and the best story Doomed Productions has released yet. The credits are intoxicating, I've watched them approximately 153 thousand times since you sent me the cut of the film. Basically I love these guys, they make stories how I like to make stories. I hope one day will be able to collaborate on a project and I'm hyped for the remaining 4 feature films coming out THIS year. So this is a fantastic sign for folk filmmaking as well as the Doomed Productions channel. I imagine it won't be long before these guys pass me in views and followers and I'll be talking about how I know these guys. With work this good I imagine that won't be long now. 5/5 a true folk filmmaking classic! Love to all involved!