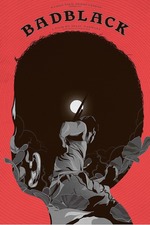 "This is the life I chose, no regrets"

Several years ago, I saw some footage of a Ugandan action film I assumed was passed around because the special effects were terrible. I watched it, laughed, and went on with my day. I saw bad effects, but a man named Alan Hofmanis saw something much different. He saw a community with a passion for filmmaking, and he wanted to help them reach a much wider audience. Alan moved to Uganda to meet the director of thirty to forty (he can’t always remember) films, Isaac Nabwana, and offered him his services. Isaac put him to work, and with the help of Alan and the rest of their village they made the wholly entertaining Bad Black.

Isaac makes action comedies (he also makes horror movies, I don’t want to sell him short) because those are the movies he and his friends like to watch, and to make. Bad Black focuses on the titular Bad Black, a gangster out for revenge. It’s filled with memorable characters and terrific action, where there is nonstop energy and the punches hit hard. It is also heartbreaking, empathetic, and has a masterfully constructed script that brings everything together in a very satisfying way.

Isaac’s style is self-aware and witty. He knows what his limitations are, but does not let them inhibit his craft. This attitude is aided and abetted by the VJs (video jokers), who provide a running commentary over the film that will have you laughing out loud. The final act gets a little off track and loses focus, but overall it is a wonderful piece of cinema.

Wakaliwood is going to be big. It has already been screened at the MOMA and according to Alan they’re already buying up props for an exhibit. Don’t be late to the party, support Isaac by buying the Blu-ray, and if Alan brings it to your city go watch it (even if you have to go at 11 PM) and enjoy the tremendously entertaining results of a talented, film-loving community. Bad Black taught me a lesson and reminded me why I love film. I hope it does the same for you.

PS shoutout to Joshua Dysart for bringing this to my attention!