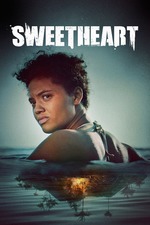 "Sweetheart" is a lean, mean, creature-feature packed with incredible moments - a black hole on the ocean floor, a surprise midnight ambush, black blood dripping off a makeshift spear - but there's simply not enough meat on the bones to justify a feature-length film. Ironically, I don't think this would have been good as short film either, as we need to spend an ample amount of time with our lead character Jenn in order for there to be some catharsis. So, the film exists in a weird grey zone of contradictions - it's way too boring even at 82 minutes, but it's precisely this length that makes the ending so impactful.

Kiersey Clemons is a goddamn force to be reckoned with, but the real MVP of this movie is the monster SFX. For such a small, low-budget affair, I was expecting small low-budget SFX, but no, this is the BIG LEAGUES, BABY! Jason Blum continues his tradition of barely funding his movies but funneling the money where it counts, and boy did it ever count for this film! The creature is massive, and the practical suit they used is replete with grotesque fins, wet pulsating gills, and and the claws of a killer eagle from Hell. Whenever they had to use a digital model for the creature, the shots were brief albeit still impressive. It never felt like CGI, it felt like a real tangible threat.

I wish they had access to a better location. Yes, it's supposed to take place on a desert island, but all we see for 82 minutes straight is a beach and the forest just inside that beach. That's it. It gets old REAL fast. Why not throw in a cool cave or something? Or perhaps a rocky cliff? A salt marsh at least?! ANYTHING, I beg you J.D. Dillard! I love everything about Clemons and the creature that's hunting her, I just wish everything around them was a little more interesting.