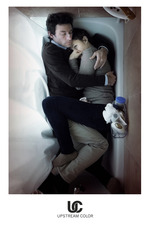 Upstream Color remains an oddity so intensely discombobulating that even after multiple viewings and a thorough explanation of the plot, I cannot understand what is happening from scene to scene. It isn't really a film playing with reality, every scene is "real" within the context of the film, it is just the construction is so opaque as to be impossible (for me) to follow.

However, and here is the trick, Upstream Color is so fantastically watchable, that it is a near perfect 95 minutes to sink into. There is something warm and intriguing about the film, in contrast with Primer's icy intellectualism. This film is a deeply emotional piece of work, that is horrific in its ideas, if not its execution. The performances are detached, but have a honesty to them, even in the most difficult to follow moments. Everything in the film plays together, from the Malickian editing, to the all-encompassing, wonderful symphonic score.

Invasion of the Body Snatchers as a natural phenomenon exploited by criminals for the purpose of...music? Wacky and still rather great.