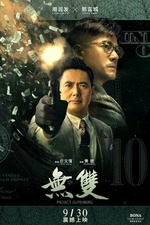 The Counterfeiter is a slightly dull, if slickly made, recent Hong Kong thriller. It feels like a 1990s American film structure taken to Hong Kong. It is nice to Chow Yun-fat enjoying himself on screen, still looking good in his mid-1960s, it is just a pity that the film isn't quite good enough. It is a little dull, for a little too long. At over 2 hours it becomes a slog. Yet, the obvious American film it is echoing, I will not spoil it but it is really clear, means that it is worth watching to the end.