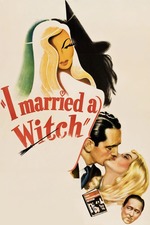 I Married a Witch is one of the most adorable Veronica Lake films; a romantic comedy classic from French director Rene Clair. Frederic March is not quite right for the romantic foil, but he does a passable screwball job, and never gets in Lake's way, which is more or less what the audience, and the film, requires. It is not a great surprise to learn that Preston Sturges had a hand in the production (until he left and took his name from the project), as it really feels like a 1940s Sturges effort, and it has a very similar level of quality as the best Sturges had to offer, and that is a major compliment. If you are to see this film, and you should, it is worth seeing the film solely for the 15 minute wedding sequence, a hilarious screwball sequence that gets funnier with every issue that goes wrong for March. Delightful. 77 of the best minutes.