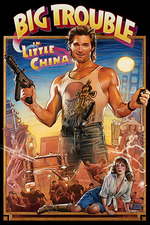 Big Trouble in Little China gets better every time I see it. I first saw it as a 10 year old. I thought Kurt Russell's Jack Burton was an unimpeachable hero. One of the great heroes. He had the hair, the vest, the bravado.

Of course now I realise Jack Burton is an idiot. Dennis Dun is the hero. The roles reversed progressively. But Kurt Russell still has the hair, the vest and bravado. Even when he is shooting ceilings, throwing a knife from his boot, he is cool. It is all in the reflexes. You know what ol' Jack Burton says. He is a true American. Buffoonish and arrogant; over-confident, under-delivered. But with the hair, the vest and bravado.

Big Trouble in Little China is just a perfect entertainment. An American martial arts comedy, with a moron at the centre, with great action, solid special effects. It moves at an incredible speed, it just rolls (after that first scene with Victor Wong - listen to Carpenter and Russell piss themselves with laughter about that scene on the commentary). The film doesn't stop moving, it doesn't let up for 100 minutes. Then stops. Jack Burton gets back in the Pork-Chop Express and rolls on to the next film. The shame is John Carpenter never succeeded at the box-office, but quality-wise, I don't think I would take anyone else's 1980s filmography above his. He just made cinematic perfection.

Big Trouble in Little China. I have watched it 50 times. I hope I get to watch it another 50 times.