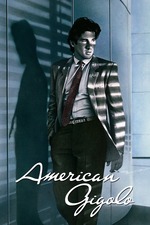 American Gigolo is another of Paul Schrader's "God's lonely man" films. His quartet being Taxi Driver, American Gigolo, Light Sleeper and The Walker. They are a fascinating set of films, as much for their flaws, as for their successes. They are character studies of opaque, egotistical demons, increasingly pathetic and less dangerous with age. They mirror Schrader himself, and his own career. American Gigolo is the second of quartet and the first directed by Schrader. The film is built around two magnetic aspects, Richard Gere's preening, marvellous central performance and Giorgio Moroder propulsive and unbeatable score. People went crazy for Nightcrawler last year (a weak, overcooked faux-satire almost rescued by an unblinking Gyllenhaal) however the whole film and more is right here in American Gigolo. The satire is better, the corrupt capitalism, the decadent horror; the central performance is more subtle and less obvious, Gere throws around homophobic, misogynist and racist language without ever losing his charm or overplaying his hand. It shows how much an audience are willing to forgive for a handsome face. And Gere's boyish, ultra-handsome mug is one of the best. The film's move into criminal activity, the power of the rich, is a flirtation around the edge of the story; a conspiracy thriller without any of the conspiracy trappings.

Yet, since this is Paul Schrader, the film is steeped with pure, unfiltered melancholia. A sleazy depression. It is a film about God's lonely man. The best scenes all being Richard Gere alone in his car, driving to Moroder's soundtrack, straight into oblivion. It is a non-emotional masterclass. Even the fantastical ending; it is all dream editing and Bresson pastiche, works better and better on review.

American Gigolo is one of the great end-of-70s films. The end of the best decade in American film. It should be happily filed alongside Cutter's Way, Blow Out, One from the Heart and The King of Comedy. It is bold, brash and superficial; it is really quite brilliant.