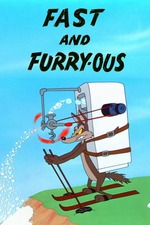 In one way, the classic Road Runner cartoons feel like the product of their particular time and place. The basic premise of the cartoons is predicated on the postwar infrastructure of the United States, with long expanses of perfectly paved roads cutting through vast arid spaces, intricately detailed overpasses and junctions seeming to exist for no greater purpose than as monuments to their own complexity, and large swathes of the country traversed by buses and marked by motels.

In some ways, it’s no surprise that the Road Runner cartoons seem to have tapped out in the late sixties, even beyond the general decline of the Looney Tunes line. More than Bugs Bunny or Daffy Duck, these archetypes are rooted in a very particular snapshot of late Truman and early Eisenhower era America. It’s no coincidence that Fast and Furry-ous snuck in under the radar in late 1949, as if the concept was too eager for the fifties to arrive.

However, as adults, aren’t we all Wile E. Coyote on some level? Aren’t we all chasing dreams that we may (and even probably will) never catch? Are we always hungry? Is our own quest for meaning so tied up in that pursuit that it’s never entirely clear what might happen if we did catch our dreams? After all, what happens if Wile E. Coyote ever catches his quarry? What does his next day look like? What does his next hour look like? Wile E. Coyote is a modern day Sisyphus, something this first short acknowledges with its own boulder gag. However, Fast and Furry-ous goes further, by not only emphasising the futility of pushing the boulder, but by having the boulder roll back and crush him.

We are all Wile E. Coyote in the desert, chasing but never catching, but nevertheless defined by that chase.