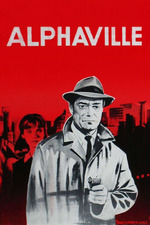 "Alphaville" looks like every shoddy, pretentious student film I've ever seen...only better. It's black and white. It's French. It announces its themes clearly, loudly and often, projecting them to the back of the room. It often seems weird for the sake of being weird. It fuses low-fi science fiction with a film noir detective story and manages to be a rather awkward, clumsy example of both of these things. There's a lot of awkward sexuality here as well (because, y'know, France).

But it has a central computer who has taken over the city that speaks in a gruff, otherworldly tone that reminded me of the lead singer of "Rammstein".

It's my first experience with Godard and I found it silly, kinda fascinating, occasionally exasperating, and unique. I probably liked it better at the beginning than I did at the end, but overall I enjoyed the strange, French ride that it took me on...even if I don't think it's as smart nor as profound as it thinks it is. It engaged me enough that I kept watching it, but not so much that I was arrested by it. I'll probably watch other Godard films. I have a feeling that this might not have been the best place to start with him.

It's not a bad movie, and it seems like a strangely influential one ("THX-1138", for instance, probably wouldn't exist without it) but maybe not in a good way. As I said, there are a lot of pretentious low-budget sci-fi films that I feel are trying to emulate this and, without seeing most of them, I'm pretty sure they mostly suck.