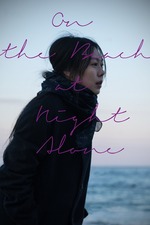 While some directors prioritize form over content and others prioritize the inverse, Hong Sang-soo handily rejects that artistic ultimatum, maintaining a rigid visual composition throughout a filmography whose content is plainly drawn from personal experience. Some viewers absolutely devour Hong's films without hesitation, while others find his arguably unadventurous approach to be consistent to an irritating degree. Conversely, Hong's style is so consistent that it can become, for some filmgoers, easy to develop a certain ambivalence to it, numbing them to his persistent visual and narrative regularity to the point where they can watch a series of his films in a short span without feeling strongly impassioned with either glorious praise or venomous dismissal. On the Beach at Night Alone, beyond having an excellent title, constitutes one of those rare Hong films for his ambivalent crowd that transcends its predictable delivery to wholeheartedly succeed in its desired emotional impact.

The personal experience from which Hong draws his material for one of the three films he released in 2017 (...jesus christ...) is the blowback resulting from an extramarital affair. While it can be uncomfortable for critics to openly connect an artist's infidelity to their work, the fact of the matter is that Hong here leaves no way around it. Not only does he apply his usual self-inserting narrative cues with the unfaithful party being a South Korean filmmaker, but—in an even less ignorable twist—he casts the very woman with whom he conducted the affair in the role she played in real life. (He even admitted to the affair at the premiere of this film.) The kicker comes from the fact that Hong's self-insert character is—unlike many of his earlier films—not actually the focus of this narrative; he's barely in it. Keeping in line with his other late-career output, On the Beach at Night Alone instead places its focus squarely on the female party.

The result is a fascinating rumination on the effects that Hong's infidelity could have had on someone else, which, for a director whose work is often tied inextricably to his own psyche, is actually bravely refreshing. From this approach we get a compellingly naked performance from Kim Min-hee who, to some extent, must be drawing on her own feelings about the relationship to inform it. The actors Hong casts already have an uphill battle when presented with script changes on shooting day that they must then process for scenes shot entirely in single takes, but Kim takes her talents a step further, tapping into something raw and uncharacteristically (for an actor in a Hong film) heated whenever her character tastes the soju, breaking down the courteous facades and attempting to make sense of the realities of love and, that's right, loneliness... on a beach (...at night).

In only their second collaboration, Hong Sang-soo and Kim Min-hee lay bare the complexities of their dynamic. Given the fact that she has starred in nearly every Hong film since On the Beach at Night Alone—which, though this was only released 5 years ago, already number half a dozen freaking films!—it's safe to say that their working relationship wasn't tainted by the scandal of their affair. But even ignoring the parallels staring us blankly in the face, viewers going into this film with no extratextual knowledge can appreciate how Hong has translated his notable reflexivity onto a new subject, all the while still not absolving himself of criticism in the matter.