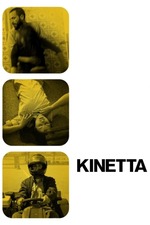 Under normal circumstances, having to go to outside sources like Wikipedia in order to understand the plot of the film I'm watching tends to be more of a poor reflection on me as a viewer than the film itself. In the case of Kinetta, however, I doubt anyone could blame me for having no idea what the point was in any of these 97 wasted minutes. Even in pre-pandemic days before my attention span was shot to shit, I sincerely doubt I'd have lasted this whole runtime—or even half of it—without veering my attention elsewhere.

Yorgos Lanthimos's first effort in the director's chair by himself feels more like what you would get if you asked someone who didn't like Lanthimos to make a film in what they thought was his style. The end result finds his performers acting with the same passionlessly calculated line delivery, but with none of the unique character dynamics to make it worthwhile. Unlike the director's later efforts, nothing about this story or these characters is funny, charming or even intriguingly off-putting. Hell, even the lacklustre Alps at least delivered an interesting premise!

Lately, in my now-widely known effort to seek out a film from every country in the world, I've reached a point where many of the countries I have left to discover suffer from undeveloped film industries. The result is that most of the films I find are not only pretty bad, but they generally feel like glorified student films. But they have an excuse. While I won't worship them for simply existing, I'm not expecting the first ever film from Belize or a generic Bahamian gay rights story to be masterclasses in technical proficiency. But Greece has been at it for a while now, so the blame for the sheer ugliness of Kinetta fall squarely on the individual shoulders of the artists.

Watching this film, you'd think cinematographer Thimios Bakatakis had never held a camera in his entire life! Not a single shot in this entire movie is set with even the slightest bit of stagnancy or composure, which could be excused as a creative choice. Well... it's a terrible choice that would make a seasick Paul Greengrass look like Denis Villeneuve when he's in his zone (which is always, btw).

Seldom does a directorial debut (or in this case, a SOLO directorial debut) mark the highest point in a director's career, and thankfully, such is the case with Yorgos Lanthimos. A film like Kinetta should be the prime case study for the thesis that "weird" doesn't necessarily equate to "interesting." In any event, it seems as though Lanthimos himself took this thesis to heart and made every possible effort to avoid providing further evidence to prove it. And just like that, Lanthimos's already shaky spot in the Zero Misses Club has been officially DENIED!

Yorgos Lanthimos Ranked. (Gee, I wonder where this'll show up...)