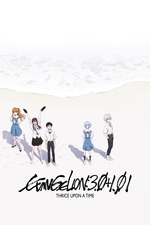 Whenever an artist strikes creative gold, it sometimes becomes difficult for them to finally separate themselves from the goldmine when its resources have run dry. For someone like Hideaki Anno, this inability to move on from the title that made him a household name in the realm of Japanese animation feels less like the desire to milk a cash cow dry and more like an indication that such an emotionally and psychologically charged series as Neon Genesis Evangelion still had some ground to cover within the psyche of its self-reflexive creator. So, about one year removed from my first exposure to his seminal anime series, the time felt right to work my way through the famed Rebuild of Evangelion saga that began over 10 years after its source show ended. The result was once again an emotional rollercoaster, but perhaps not so much in the way that Anno had anticipated.

Things began on the rough side with You Are (Not) Alone, which acts as a straightforward retelling of the first few episodes of the show. In some ways, this feels like essential setup for what's to come, but as its own film, this kickoff feels rather pointless as, if anything new was added to this iteration, it wasn't significant enough to stand out. Not only does this film keep the events of the show unchanged, but it also maintains that quick pacing which, while suitable for 20-minute episodes that go beyond an initial 6, feels entirely rushed for one two-hour movie.

You Can (Not) Advance is probably the best entry of this 4-part tale, for while some of the adjustments to the original series seem misguided (cutting down the legendary elevator interaction to near-nothingness is unforgivable!), there are enough entirely new additions that still feel in line with the overall narrative. In this way, the film—unlike You Are (Not) Alone—justifies its existence as a separate piece from its inspiration, while also making sense within the established universe, building excitement for what's to come.

Anno's risk-taking makes a huge leap with You Can (Not) Redo, very much living up to its title by finally taking the series in an entirely new direction with a significant time-jump. Here, the shifting of character arcs is an intriguing idea, but for the most part, these new changes serve mainly to confuse, and ultimately, while this change in direction may be more appreciated than simply retelling the original story beat-for-beat, this adjusted narrative doesn't feel like much of an improvement. Worst of all, this time-jump forces us to abandon interesting teenage relationships that were the crux of what made the show so special. The final film tries to make up for that by exploring the sense of displacement, but the results are, again, a massive downgrade.

Finally, we get to Thrice Upon a Time, which fully cements my gut-feeling that Anno, with these last two films diverging so wildly from Neon Genesis, was simply making new shit up as he went along. By this point, the changes foretold in You Can (Not) Redo take form in ways that are (like its predecessor) simply not as appealing as what they're replacing, making for a head-scratching experience. End of Evangelion and especially the final two episodes of the show that it complemented were also fairly confusing in their headiness, but Thrice Upon a Time draws its convolution not from Shinji or Gendo's complex characterization, but rather from the storyline that never clearly establishes the stakes or what any of these "impacts" actually mean.

Thrice Upon a Time is pretty emblematic of my issues with the Rebuild Series overall, as it at once makes wild changes to the storyline that are too perplexing to be engaging and adheres to the established formula in places where changes would have actually been appreciated. In no place is this dichotomy more apparent than the climax, in which the real-world action becomes a constant pile-on of newly introduced setbacks and solutions that are treated as though they had been properly established the whole time, while the emotional/cerebral conflict that Shinji must finally overcome feels like a sluggish retread of the finale we already got 25 years earlier.

It's easy to imagine that such a hefty undertaking took its emotional and physical toll on Hideaki Anno (with a 9-year gap between the latter two installments). Hopefully, that means that Anno is finally ready to put the Evangelion story behind him once and for all, because if Thrice Upon a Time and the Rebuild Series as a whole are indicative of anything, it’s that this narrative has run its course. The consequence of this Fourth Impact was little more than frustration.