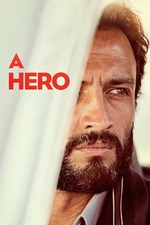 The world of A Hero is a world in which human error is never accounted for. A world in which the smallest act of apparent altruism is touted as a life-altering recuperation of honour, only to be broken down with endless scrutiny by that very crowd who instilled that sense of hope to begin with. It's a world in which politeness and courtesy open the door for one to explain themselves, only for their words to be cut off at every turn; where each and every roadblock of skepticism elicits a frustrated "What more could you possibly want from this guy right now?" out of the viewer. The world of A Hero feels like anything but a hero's world, but it's Asghar Farhadi's world, which means it's all too nerve-wracking because it's all too real.

The Iranian wordsmith currently sharing the crown with Hirokazu Kore-eda for cinema's greatest modern humanist, Farhadi steps slightly out of his comfort zone with A Hero by shifting focus away from the marital strife that defines his most acclaimed work. Of course, because it's still a Farhadi film, these matrimonial complexities still find themselves woven into the fabric of this story, but for the most part, the focus rests squarely on one man trying to get back to his family at a more permanent capacity. Whether or not the road he ends up taking was an intentional plan from the start or merely an unexpected byproduct of yet another fall-through followed by an impromptu visit from his conscience is left unclear, but that ambiguity is what has always made Farhadi such a masterful storyteller.

On more than one occasion, I've praised films that "present their difficult characters without asking viewers to judge them." A Hero cements just how much Farhadi exemplifies this philosophy in all of his work, but with a special twist. In his work, Farhadi asks us not to pass harsh judgment on his characters, while the characters themselves spend the entire runtime passing this sort of judgment onto one another. Obviously, the narrative presentation of A Hero implicitly asks you to decide for yourself the true level of virtue worthy of this man, but through Farhadi's even-handed eye, you're shown that it ultimately doesn't matter, when every attempt at reconciliation—regardless of if the intention is genuine—is either met with undying skepticism or is blown way out of proportion, ultimately circling back to that dreaded apprehension.

To relay this new-age human drama in which the court of public opinion now has more sway on the actual courts than ever before, Farhadi once more skews his own formula famous for the piling-on of juicy narrative curveballs. This time, rather than hitting us with a barrage of gasp-inducing marital reveals, what are treated as scandalous revelations are bits of information that we've actually seen firsthand. But owing to the increasingly messy situation in which they find themselves applied, these bits of information become reveals in how they're used as weapons. It's as if Farhadi, who normally places us right into a centre of a minefield, this time handed us some harmless stones to toss about, only for them to wind up having been active grenades...

Having read all this, you'd be excused for thinking A Hero were simply a one-man show starring Asghar Farhadi. And of course, that's not the case, especially given the fact that, if anyone were to be the headliner of a one-man show dubbed A Hero, it would most logically be Amir Jadidi, whose soft demeanour and innocent smile make him both a sympathetic lead and a moral question mark the more we see how he handles this unexpected situation. But at the end of the day... yes, of course this is the Asghar Farhadi show!

Even beyond his magnificent screenplay, the director continues to expand his panache behind the camera (this time shooting in a higher frame rate), which may still not be enough to place him on the pedestal of distinct visual auteurs, but at the very least, it sets him above those writer-directors who—like say, Aaron Sorkin—are more accurately great writers that just so happen to direct their own scripts. And speaking of Sorkin, it's downright disgusting that Prime Video is pushing Being the Ricardos for awards consideration when they've got this movie just sitting here, relegated to the endlessly underserved ghetto of the Best International Feature race. A Hero deserves better, but much like its (perhaps disingenuously?) titular character, who really knows whether Farhadi is even asking to be held in such high esteem?