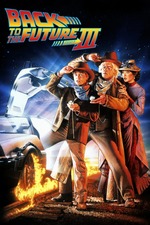 Back to the Future Part III

Film #1 in the June Challenge

I love the Back to the Future movies so much.

They're just so much fun. So full of rip roaring adventure, seats of your pants tension, wonderful characters, beautiful world building, a hilarious sense of humor, and a terrific amalgamation of subtle but resonant themes about the way we change over time, and the debate between free will and destiny, and the importance of family and a whole mess of other things. It's small but powerful, and honest to god is probably my all time favorite science fiction franchise.

So why did I wait so long to see the third one.

I mean, I've played the (terrific) video game, for God's sake. But I only just now watched this one, and I am kicking myself because it is delightful.

Back to the Future Part III largely sidelines the science fiction aspects in favor of a straight Western, but it works as an ending regardless. It puts the focus again on Marty and Doc, two wonderful characters,and becomes not just a fun adventure flick, but a really touching examination of bravery and what makes a man a man. It honest to God moved me. And it's just so much fun!

I love these movies. I truly do. They just make me so damn happy. That theme song is maybe the greatest movie score of all time. I don't know what else to say except I kind of want to just rewatch the entire trilogy right now.