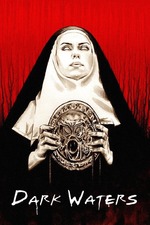 threat fundamentally comes from more than the character going from safe place to new threatening place. reminds me of another Lovecraftian film called Dagon where there's almost a resonance, this kind of primal frequency that we don't understand doing it's business on us.

Twin Peaks has a similar thing - in things like how we suddenly land on characters like they were waiting for a cue. like if we hadn't arrived they would just be vessels glitching in silence. maybe there's a loop of a plate rattling or a bird scuttling about a cage every half a minute or something (if you've seen the genius Blu-Ray menu loop for it you'll get what i mean). but more in the ST & how it matches the narrative flow, schmaltzy soap gloop finding the storm drain, what's down there we don't want to guess at but it's calling to us, reeling us in - like it's prepping it's stomach acids for us & we are helplessly floating on