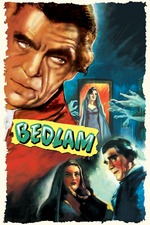 aka distressing bleakfest '46. power motivations @ gruesome level but don't be mistaken in thinking that the early "oh christ i have to be in here with THESE people" feels, rather than "the true insanity comes from those fellas keeping me (oh maybe all of us!) here under false pretenses" sentiment is a place the film wants you to land on. it doesn't sit for a second that karloff is morally justifiable & scenes that depict the institutionalized people poorly generally reflects miss bowen's initial prejudices in various situations. like somebody shrieking & grabbing through the cages through one lens is a violent maniac, but it's also a begging for help depending on where your sympathies rest. it also criticizes the power elites have over the political process, dissent, how easily power can re-frame grievance (through whatever form that power happens to take) & reinforce ideas about what sickness is in the first place.

crippling injustice looms for a bit, then we're basically in that indiana jones gaff where the walls with spikes are a'coming. but instead of making a cheeky comment to the little chinese boy or going back for your hat, you're paralyzed like that scene in get out or dissolving inside of yourself like in under the skin. it's brutal like BK's furry brow-line before it starts to illuminate the once dark way you/the lead character saw things by confronting the fear & realizing the bullshit you believed was just that - they were just people suffering. compassion & understanding were the keys to the cage.

The Shop Around the Corner