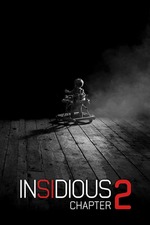 I wish the makers of Insidious 2 could know how important this movie is to me. I could not be less void of sarcasm about that and I’ve unabashedly felt like the only living person who's responded the way I did to it.

I could go on forever about Insidious 2. The first is real good though on its own the ending is absolutely upsetting. But then the second is just a revelation. Not only does it turn both together into a 3.5-hour event, but it's hands down the greatest payoff I've ever seen. Especially when I consider horror which much of the time exists to leave things upsetting, I never thought a story could 180-degree to such earned badass hype. I don’t count Alien to Aliens cause James Cameron just went and pulled a pre-T2 on an I.P. that wasn’t his to begin with and with long distance between the iterations. I'm talking the exact same people and back to back entries. And I mean Insidious 2 is so overlooked and dismissed especially in comparison to the first, yet I understood every choice and move it makes.

First one Red Lipstick Demon is supposedly the main villain but then turns out to be a Looney Tunes cartoon bad guy, and the real villain is that freaking scary old lady and the ending to the first is so upsetting cause it's just you and Renai who knows it's Bride in Black so not only is it freaking scary but it's frustratingly lonesome in how isolated the scariness is. And then look at the poster for Insidious 2 with Renai & kids VS. Bride in Black and try not getting pumped at the wrestling match that’s being promoted. Right away it's foretelling "No More Fear, It’s Going Down".

Whereas with the first the characters are largely trapped in their fear and not understanding what’s going on, with Chapter 2 they straight up fight back and bring the pain to the demons. Cause now that the demons’ secrets are out, they’re the vulnerable ones with everything to lose—the Lamberts and company making decisive counter attacks to take back their lives from those ghost douchebags.

Thing of note is it doesn't feel weird or out of place either. Insidious 2 isn't at all a parody or undoing of the first, which is how it's so brilliant; rather it's a mega-evolution. Doesn't feel tacked on, forced, or contrived. It makes all the difference when what happens in the sequel was the plan. That's how I felt when I first saw it and I only found out later when reading up that that was the plan. So holy crud they actually pulled it off. Watch them back-to-back and story-wise it's seamless. Insidious 2 is as rewarding as an unexpected second-half-of-a-story payoff gets. Do both together and this is the best example of a first being resoundingly elevated by the second.

Watch Insidious 2 contextualized as the last half of the collective Chapters 1 & 2 so to behold how avant-garde-level hype-entertaining-thrilling it is. First one's an already-zany horror. Chapter 2 is a straight up ghost detective showdown and also rewardingly hilarious. Whereas Bride in Black is the scary mystery in the first, in Chapter 2 they go “Yo fudge that" and take on Bride + Bride’s Mom head on, investigating the crud out of them and launching the counterattack [quesadilla <33333333333].