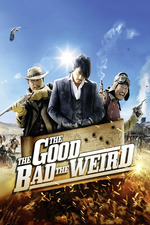 A massively entertaining romp that unbelievably manages to combine the simple narrative structure of Leone's classic its title apes (three men on a mission to find treasure), Raider's of the Lost Ark's period romp and sense of unabashed fun, Stephen Chow's films such as Kung Fu Hustle for its sense of energetic humour (although not as outlandishly cartoony) and countless lesser spaghetti westerns for their insane western gunplay and set pieces and lack of reliance on anything other than 'cool'.

It shouldn't work. But it does. Wonderfully.

The narrative is only as drawn out as it needs to be - the three main characters are about as stock as they get (the handsome K-Pop band member/utter deranged psychopath, the ice cool and mysterious bounty hunter, and the borderline idiot who somehow manages to get in the middle of all this); but the film isn't built around them....it's built around a set of utterly mesmerising action set pieces.

An opening three-way train heist sees the map come into play as all three of our protagonists/antagonists converge for the first time and has the camera flying in, around and through carriages, all the while the train continues to move and it sets up perfectly the near maniacal energy for the rest of the film. A stunning gun battle in the Ghost Market sees almost Jackie Chan levels of choreography come into play, as assassins fly about on pulleys and bamboo poles, firing hundreds of rounds at each other in a desperate attempt to kill everyone and everything; and an extended horse, car and motorbike chase across a desert plane sees explosions firing off at a level not seen outside of a Fast and Furious film. They are literally some of the best action set pieces I've seen in a while.......

......and its all thanks to director Kim Jee-woon (of other stunners A Tale of Two Sisters, I Saw the Devil and A Bittersweet Life). As visually arresting as those other films, this is his 'fun' film and it works effortlessly to all out entertain. It does go on a little too long - 130 mins means we have some side tracks into some pretty dull territory such as the brothel capture and subsequent lesson on Korean history which very much felt like a shoehorned in agenda.

But on the whole this was an utter blast. Sheer unadulterated fun, this is Jee-woon at his most playful, yet still retaining his amazing eye for a shot. And I haven't even mentioned Kang-ho Song........