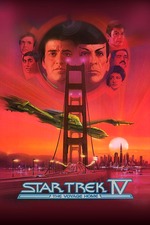 Always viewed as the red-headed stepchild of the OG films for me, this rewatch can't hide the fact that its still the best of the bunch for its character interactions and its sense of playfulness, even if it still feels horribly out of place in the rest of the franchise.

If TMP is the film made most for Trek fans, this is the one made most for non-Trek fans. Its the one your non-film nerd friends and families will have seen and they will have enjoyed it, a sense of fish-out-of-water comedy and right on environmental message making it almost universally beloved.

Yet for me, it still feels a very poor follow up to the WoK and SFS - huge events happening in those films are suddenly brushed aside to watch Scotty talk into a computer mouse and while no doubt amusing, it felt the wrong film for this point in the grander narrative. Add in a plot line far too similar to TMP - mysterious force travelling towards earth searching for an answer to a message that no-one knows anything about - and way too much plot contrivance and happenstance and it'll never be one of the better entries for me.

But I can't deny having way more fun with it this time round than I had on previous watches. Nimoy knows actors and he gives all the crew their own moments to shine, resulting in the film that simply has the most and best of these characters. Some joyous character moments just work - McCoy in the hospital is a hoot - and it now feels like one of the frivolous OG episodes that always came right after one of the more serious ones.

Begrudgingly better than I thought it was after all these years........