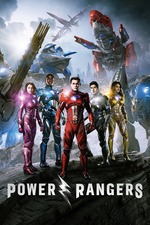 I have no previous with Power Rangers (I was too old when they hit big in the mid 90s over here) and honestly, I had no interest in this film....until the great reviews the transfer on the Blu-ray was getting (what can I say, I'm a sucker for Dolby Atmos!).

Its very much a film of two halves.....well thankfully more like one of three quarters and one quarter. The first 90 mins are the Rangers origin story. After a random prehistoric prologue, we're off.....and by off, I mean this is supposedly a kids film that starts off almost immediately with a gag about milking a male cow if you know what I mean....... Yep, what we have here is one of those rare beasts of a kids/teen movie that's actually a bit more grown up than it should be.....and is all the better for it.

As five random kids come together thanks to random plot mechanisms, we get a really rather pleasing teen flick more akin to those great teen flicks of yore - spiky dialogue, chunky themes (covered albeit broadly) and actually some winning characters and actors.

I'm not ashamed to say I thoroughly enjoyed this first three quarters of the film - in fact, the best bits of the whole film are when there's no actual power ranger's in sight! Best description I saw of this was Chronicle meets The Breakfast Club, as they meet a wall of pixels that looks like Bryan Cranston who tells them they need to train to become power rangers and train they do. Throw in Elizabeth Banks being really nicely evil (oh and very Elizabeth Banks like.......meiow ) and I'm on board.........

......and even when the finally turn all primary coloured and powery, I was still on board thanks to the pretty cool design of the suits (no spandex here!). So its such a shame that for the final 30 minutes when the Rangers do their thing, I just got completely taken out of the film by the really random power rangers-ness of it all. Rock dudes, a big gold dude, dinosaur transformers, a maguffin.......nope, dress up the film how you like, set it as nicely and almost real worldly as you like.......but there's just no getting away from it: power rangers are still just as randomly Japanese as they ever were, only this time with a far bigger budget and better design,

The first 90 mins are really rather winning - I'm still a teenager at heart, so can still appreciate a decent teen flick and this was very much one of those. But when they do finally become those pesky Rangers, the film just turns so random that it lost me. I'm all for crazy bat plop stuff, but this is just too out there for me. Breakfast Club/Chronicle for 3/4s, then its diet Transformers crossed with a Japanese gameshow for the final 1/4.

Summary - better than it had any right to be for a non-fan like me (but if it had embraced its uber campness could we have gotten something very special....a Flash Gordon for the '10s? Who knows), the scenes not involving stupid creatures and randomly designed robot...thingies were really rather good. But those final scenes, its raison d'etre, just wasn't for me, so I cant recommend it unless you are a fan of the original series.