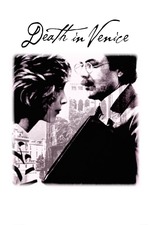 Lucino Visconti's much heralded yet problematic classic is far too languid in its depiction of a man consumed by obsession to maintain the interest across its mammoth 130 minute run time.

Despite a stunning performance by Dirk Bogarde as a composer in ill health travelling to a pre-WWI Venice and becoming infatuated with a young boy, Visconti's choice to tell the story through looks and glances means scenes are stretched out to almost interminable lengths. Whilst undeniably beautiful to look at - each and every scene in the early parts of the film are packed full of life, teeming with detail and texture - at times its a painful watch, excruciating almost.

And while there is some real emotional depth buried within these scenes - philosophical debates over the nature of beauty (spiritual or sensual?), of art, of our own mortality and aging - its dragged so thinly across that runtime, that it becomes a chore to sit through.

Finally, and perhaps most problematic, is the fact that its central conceit is that of an old man developing a very troubling obsession with a fourteen year old boy. Despite an age spent trying to rationalise this - not excuse it - through all manner of family tragedy and through the prior discussions around the links between art and physical beauty, there's just no getting away from this. Even though nothing is ever consummated - even after 130 minutes not so much as a single word is ever said between the two - it still feels somewhat icky, especially as the film seems to have developed a similar obsession with itself.

There's interesting themes going on here - a mysterious plague is maybe sweeping through Venice, hinting at the deterioration of the physical self (both of the city and of Bogarde) and the corruption of beauty and of Bogarde's sense of self (his desperately sad attempts to making himself young again) - alongside everything else, but its 90 minutes of content stretched far too thinly.

I can see why its so highly regarded, but for me that runtime and how its constructed hurt the film terminally I'm afraid.