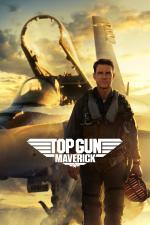 a thoroughly retrograde affair, even more than these legacy sequels usually are; the original top gun is a high-concept demo reel for the american military machine, but still sleek and modernist, aware of it's own formulation, knowingly silly and jingoistic; maverick feels like a 1940s classic, with montages that owe more to howard hawks and michael curtiz than 80s music videos. cruise is impeccably charming, finally easing into his elder statesman role, giving us his most emotional performance in years, throwing everything he's got into this frankly under-written script that feels somehow less cohensive than the original's barebones scenario. this is a work that coasts on pure emotion; eyes bulging from gravity's weight in a cockpit, to kilmer's wounded, still brilliant smile. as a sequel, it doesn't really work at all, sketched loosely in vague ideas and dizzying, expensive setpieces pushed to front-and-center; but as an ode to cruise, his career and his infinite passion for filmmaking? it flies free, and bold; pushing into its contradictions, stressing melancholy, discontinuity, absence, the lingering sunlight across a person's face before dusk, the sudden breach of loss and death, knowing that you can never go back to those glory days. but you can preserve what they meant to you, why your memories are worth keeping, and how they inform what you can do moving forward.

no matter how fast the planes in maverick are, mach 8, 9, mach 10, you get the feeling that they'll never go beyond the horizons that tony scott painted with his camera. i think cruise wants to keep it that way.