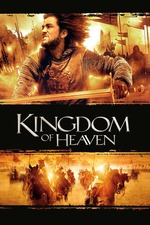 the exact kind of stupendously moronic revisionist epic that only an idiot-savant like ridley scott could make. monstrous in scope, heaps upon heaps of gruesome violence, a formidably stacked cast of thespians, all these half-baked thematic platitudes about religious tolerance and chivalry and ethics, it's all here. i can't decide whether to laugh at the portentous 2000s-era gritty desaturated gloominess, or to uncritically adore it; i think i'll do both. the whole script is just a cinematic playground where ridley scott stages a teenager's naïve conception of medieval history in which a singular peasant magically transports themselves through sheer coincidence and willpower past all class divisions and social strata. reminds me a lot of the assassin's creed videogames where 70% of the narrative is a thinly-veiled excuse to hang out with cool historical figures and participate in notable conflicts (there's even a big part of this where orlando bloom gets shown his dilapidated inherited estate and begins working on improving it by building a well to irrigate the land, totally feels like a base-building sidequest in asscreed 3 or some shit.)

some would criticize kingdom of heaven for being a vacuous interpretation of the crusades, pointing out the clinical de-emphasizing of the role of religious fervor in favor of a particularly modern kind of secular populist chauvinism (orlando bloom and all the main characters in this preaching an inclusive respectful atheist humanism), ultimately treating the time period not as an era of incognizable theological strife, but instead as a beautiful and empty pictorial panorama for ridley to gracefully paint a colossal display of indulgent hollywood recreation, and they'd be right for saying that critique, because that's exactly what this is; it is style over sensibility, it is overblown nonsense bearing only a casual relation to historical reality.

but isn't that itself one of the great things that film as a medium can achieve? kingdom of heaven embodies the great pop-culture notional idea of the crusades, not the fact, and i honestly don't really give a shit about the facts therein, if i wanted them, i'd read a book concerning the subject. ridley scott does the right artistic gesture and distills hundreds of years of history and culture into a singular depiction that soars above the meager display of facts and instead gives his audience something much more meaningful: an iconic spectacle that makes them feel like they have a personal understanding & involvement of a historical period through this compelling art. when said spectacle is this majestic and entertaining, you let the painter paint.