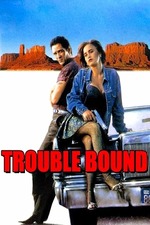 Opening note: I wear the same Ray Ban Clubmaster Classic shades that Michael Madsen wears in this flick. That's one mark in its favor before we even begin. Anyway, let's light this candle.

Michael Madsen is a small-time gambler, fresh out of a stretch in prison, with $5,000 in his pocket. Patricia Arquette is a stripper on the run from her mobbed-up family. Gene Wilder is a candy factory owner with a Golden Ticket for kids and a tube of Astroglide. Wait, what? Jesus, I might be getting distracted already.

Madsen and Arquette meet cute at a bar fight related to the honor of active duty Operation Desert Storm veterans and an old game of The Dozens, which makes me feel young. Anyway, Madsen gives Arquette a ride to Nevada in his custom Lincoln Connie. Neither of them know there's a dead guy in the trunk. Other criminals want the dead guy and / or Patricia Arquette. Hilarity ensues.

As I have been told, there is a real neo-noir feel to this flick. Noir usually starts with a woman: Arquette is one who causes Madsen to make bad decisions that lead to what could be his doom. She convinces him to get into a high-stakes poker game with some shitty poker player who ostensibly wins because he employs all his opponents. Turns out he employs all his opponents because he is in the mob. Like Arquette's family. Which doesn't make the shitty poker player happy. Particularly when Arquette shoots his fingers off. More hilarity ensues.

There's a lot to like about this movie. Madsen and Arquette have some solid chemistry, although Madsen has never had the range to truly disappear into any character, so it's impossible to not see Arquette playing a very dangerous flirtation game with Mr. Blonde from Reservoir Dogs, who is less a tit man than an ear man, but that doesn't matter.

What matters is that Madsen is wearing his best Thin Elvis drag in a role where he's the least threatening of all possible convicted criminals, and Arquette is a flibbertigibbet of a femme fatale who might settle down to being relatively benign if she can just get Madsen to help her kill one particular guy. Maybe. Plus, half the goons wear either grunge or Fishbone chic, so the whole movie oozes early 90s cool. And that goes a long way for me.

But there's a very real and important question driving this movie that isn't answered for the first two acts: what the fuck is all this about? First it's about the dead guy in the trunk. Then it's about his jacket in the back seat. Then it's about some other dead guy and a key he ate in act one. Then it's about some dipshit who killed Arquette's father, and a long-time Mafia alliance. It's kinda confusing, but luckily, it ultimately doesn't matter all that much.

All that matters is that Madsen picked up the wrong woman at the wrong time, and it fucked his life all up. And he'll keep following her no matter how badly it eventually fucks up his life up even worse. Whether that location is in a casino in Reno at gunpoint, or in Monte Carlo afterwards. That's noir. And that's fun, even if a real noir ending should really make it clear that Madsen's association with Arquette should end with him in jail bitching about her to his cell mate.

This was pretty good, and it was certainly better than one would expect from a movie directed by the editor of BASEketball, and so obscure it's apparently never been remastered to HD. Better still, it's fun. Extra points for making Fish from Barney Miller's wife into the movie's only criminal mastermind.