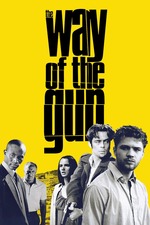 Yeah, okay, on revisiting this, it's got some problems. No human being has ever talked like the characters in this movie, and as a first-time director, Christopher McQuarrie is too in love with his own dialogue to make some cuts that would help out with the pacing. And he's also too in love with how he thinks a thing like a gunpoint kidnapping in a public place would play out, with pseudo tactical bullshit that moves just a hair past tense and into slow. And I have a sneaking suspicion that he might have filmed that "slow-speed" chase because he didn't know how to shoot action yet.

But dammit, context matters! Sure, this is a Tarantino knockoff like a million other between 1994 and 2000, and God knows this is no Pulp Fiction. But that's what we wanted! We went and saw terrible shit like Two Days in The Valley and Boondock Saints hoping to see that kind of lightning in a bottle again! Shit, that's why we bitched about Jackie Brown for about two years after it came out - we spent a couple of years hearing about Tarantino's movie with Robert DeNiro and Sam Jackson and Pam Grier, and what we got was middle-aged people flirting and DeNiro as a fucking loser. It took a while for some of us to learn to love that movie for what it was, instead of what we were hoping it would be.

As a Tarantino knockoff, you can start with a worse pedigree than the dude who wrote The Usual Suspects, you know? Sure, he loves his dialogue, but there's some dialogue here that's worthy of loving. I will stand by "Your prayers are always answered. In the order they're received" as a great near-closing line for a crime flick, and that, "The only thing you can guess about a broken-down old man is that he's a survivor," is on my lips more and more as the 19 intervening years since this was released have passed. And there will never be a bad time at any day job to drop, "To tell you the truth, I don't think this is a brains kind of operation."

Besides, as this moves along, it moves away from urban, Pulp Fiction crime movie knockoff into a spaghetti western, and it does it only three years after Tarantino and Rodriguez did a similar pivot from a kidnapping plot to a vampire movie! But still, McQuarrie and cinematographer Dick Pope get some good-looking western shots with popping color, and some interesting effects - Longbaugh giving instructions to Painter at the truck stop, with Longbaugh completely in shadow and Painter in light was kinda cool, for example.

Yeah, I'll grant that there are way too many coincidental relationships here to be in any way believable - so the rich guy's son is the actual father of the child being carried by a woman who is the daughter of the bagman negotiating for the child who is meant to go to the rich guy's wife who is fucking one of the bodyguards who is going to seize the child by force, and I am fucking exhausted just typing all that shit out. But it does provide McQuarrie opportunities to spin characters off of each other with conflicting motives and implied betrayals. Sure, none of which really wind up playing out in any significant way, but the add a little something to the proceedings.

Let me advance this theory: The Way of The Gun might be as pure a neo-noir as the Tarantino knockoffs ever generated. Yeah, it's mostly in daylight, but every character in this flick is a scumbag with ulterior motives. Every character is ready and willing to turn on each other at a moment's notice, including Parker and Longbaugh at times. And everything is driven by a femme fatale - Mrs. Chiddick isn't a major character in terms of screen time, but she's sleeping her way to the main chance, and her desires drive literally almost the entire movie... and in the end, everything we see is all for nothing because of her capricious changes in whim. As far as I'm concerned, that all adds up to noir, man. And it's part of why I will continue to maintain that there is more going on in Way of The Gun than many people give it credit for.

And you know something? This movie closes with one hell of a gunfight. Either way, if the scene when Parker dives into the fountain doesn't give you the douchechills, I don't think you and I have very much in common at all.

Look, I understand why some might not like this movie as much as I do. It's awash in testosterone and pop philosophy and in love with its own voice. And in the interest of objectivity, I'm knocking off half a star on that basis.