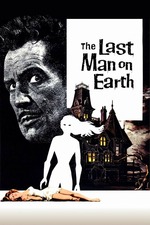 (Note: Depressingly knocked a star off on rewatch)

I think I first saw this on Creature Double Feature when I was a kid, long before I ever saw Night of The Living Dead, but as I recall it was one hell of a primer for that movie. I might have seen it once since then, but to this day, despite three other tries by Hollywood, I remember it as the only half-decent adaptation of Richard Matheson's novel I Am Legend, despite the cheesy expositional voice over that populates the front half of the movie.

This is the first movie I can remember where survival amounts to a shitty suburban day job. Vincent Price isn't spending his days hammering probing zombie fingers at the window or grimly picking off invaders with his scoped .460 Weatherbee like a BEEEG MAAAAN, he's running errands. He's swinging by the gas station before dropping off the (dead) kids, then dropping by the grocery store for fresh garlic before a long day of door-to-door vampire killing, with just enough time and energy to do some work around the house, drink a few dozen cocktails, and crank up the jazz to cover the sounds of the rotten neighbors partying and plotting your demise.

Matheson's book, and by extension this most faithful adaptation, gets something that even Romero and all the other zombie apocalypse stories, with their implicit wish-fulfillment fantasies of seeing society fall and then being able to take what you want in the world, never got: eventually, if you have to do something every day, that means it's your job, and it starts to suck. Of all the zombie movies since NoTLD, this is the only similar movie that posits the Zombie / Vampire Apocalypse as the equivalent of a shitty assembly line job with no benefits. It's boring, but you can't quit, because it's the only gig in town.

But then the movie starts to fall down. The nature of this story is that vampirism needs to be medical, and medical in a way that a dude with minimal resources can find a cure. That means setting a backstory where Morgan is a scientist and we see the beginnings of the plague when we don't really need to. Sure, they keep the actual cause of the plague ephemeral, but watching society break down is only exciting if you have a budget higher than 300 grand and access to color film stock. So act two is really kind of a bust, as we spend half an hour running in place, waiting for the actual story to start back up.

Once it does, things don't hold together as well as I remembered. We motor through a subplot where Morgan sees a dog and gets his hopes up that he'll have some companionship, only to have them dashed so quickly it almost doesn't matter. Then we get into the real endgame, where the thread gets almost totally lost.

Here, the kinda-vampires come to kill Morgan and the tragedy is that they've killed the cure to vampirism, which lives in his blood. But none of the simple elevator pitch of Matheson's story - what would be the boogeyman to the boogeyman? - really comes through or lives through the climax. Sure, they try to replace it with a whole Tree of Liberty / Blood of Tyrants / revolution theme that would hold up better if it had been given more than three sentences of expository dialogue and ten story minutes to percolate enough for anyone to give a shit, but it still falls flat. There's just something about Matheson's original ending that seems to be unfilmable.

Even after so many years, I still maintain that The Last Man on Earth is the best I Am Legend adaptation available, other than maybe the Steve Niles and Elman Brown comics adaptation, and that gains it a half star. However, as fondly as I remember this flick, it simply doesn't hold up as well as I'd have hoped.

But it does support my Zombie Apocalypse plan of facing it in an exposed area, prone, in a fetal position, wrapped around a quart of Jefferson's Reserve bourbon, shrieking "Winner winner, chicken dinner!" The alternative would be survival, which clearly would just be too Goddamned tedious.