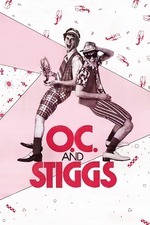 (NOTE: Knocked off half a star on rewatch)

I'm gonna start here: the original National Lampoon story, The Utterly Monstrous, Mind-Roasting Summer of O. C. and Stiggs, is a Goddamned classic of written humor for any fan of HST-style, gonzo writing. My love of that story led me to rent this on moldering VHS from my local video store about 20 years ago. And I remember almost nothing about it.

I'm gonna try to ignore the original story and talk about this on its own merits, which is gonna be tough as I have read the story about fifteen times, whereas it is almost impossible to see this movie. Almost.

This movie is almost a parody of 80s boner comedies, except the antagonists are the heroes. They are terrible villains who are friends based on their combined hatred of the Schwab family, which is populated with the kind of misfit nerds who were generally the heroes of the movies like this. And that's okay, as it was kind of the point of the original story - Goddammit, three paragraphs into this thing and I'm already going back on my word. But O. C. and Stiggs, as characters, were never anything but MONSTERS. They were sociopaths of the highest order, which made for damn funny reading if you were, say, 17 when you first came across it.

The high notes of those written characters are here, but Altman puts an unnecessary layer of backstory on them to make them relatable, after a fashion. O. C. has a senile grandfather he needs to take care of. Stiggs is from a rock-ribbed Republican family where dad is a philandering dickweed. These little tidbits make them more human than beast, but trust me when I say that's not necessarily the best tactic for characters like these.

Soon enough, O. C. and Stiggs go off to meet their friend Sponson - Dennis Hopper, playing what amounts to his character from Apocalypse Now - to buy a machine gun to give to a Schwab as a wedding gift, and I think I get what Altman is laying down. This is less a parody of teen boner comedies than it is an indictment of the 80s using that formula.

We've got Sponson embodying the 60s, and the Schwabs embodying the 70s corporate sellout of the 60s, and O. C. and Stiggs: two 80s douchebags with nothing but free time and the disposable income to not only eschew summer jobs, but to turn a detestable $100 1950s Studebaker into some kind of horrific lowrider on hydraulics meant to horrify passers-by. The 60s were doomed and the 70s were a sellout, but here are the 80s: we have money. Here we are now. Entertain us.

Which might be a little heady for what was marketed as a teen boner comedy, but I'm gonna ride with this, since this is based on one of the funniest prose pieces I've ever read, yet I'm half an hour into this movie and I haven't laughed once. There must be some higher purpose at work here, because otherwise this Altman flick is a failure on the level of Health, and I'm not ready to go there just yet, considering I managed to survive Pret A Porter, a movie with which I have nothing in common, without losing my shit or laying hands on people.

Regardless of intention, this flick still has the Altman feel - in a dancing segment that would normally be presented as pure fantasy, we get that overlapping Altman dialogue between onlookers that grounds the fantasy in conversational reality, despite the fact that the scene requires us to believe that Cynthia Nixon is attracted to Daniel H. Jenkins, international superstar of such movies as O. C. and Stiggs and known penis owner.

But once I think I have a handle on this flick, it meanders. We get a subplot of the duo trying to convince their "friend" Barney to go with them to Mexico, which makes no sense whatsoever to anyone who didn't read the original story due to reasons I imagine ended up on the cutting room floor. But the mission is to see musician King Sunny Ade, possibly to show that Robert Altman was either a fan of world music, or that he had seen The Blues Brothers and thought music strange to white teenagers equals automatic funny.

This movie is all over the place, while still seemingly trying to have a point. We spend some time with the Schwabs, moving slowly and steadily further and further toward the radical right wing, while O. C. and Stiggs, the next generation, chucks money around on lobsters they don't eat and sometimes throw out the window at passers-by, at least anecdotally, which is objectively less fun than literally. But then they wind up at the home of Pat Colletti, who is a stereotypical 80s yuppie, and the hero of the two protagonists because he's found a way to exploit Mexicans so he can make millions and drink all day, and I don't know WHAT the hell Altman's trying to tell me.

Then we move to O. C. and Stiggs starting a drug rehab charity to save O. C.'s grandfather who was thrown into a nursing home with little plot warning. Things devolve into a fireworks fight and an Apocalypse Now helicopter attack complete with Dennis Hopper, and I'm getting a vague message that either Altman thinks the 80s can't live up to the real legacy or the 60s when put face to face, or maybe just that Dennis Hopper was surprisingly affordable in 1983.

That is the natural ending of the movie, except that Altman left the whole O. C. moving to Arkansas because of his grandfather plot line dangling, so we get five minutes of extra story no one needed to wrap that up in a way that only ties to the preceding plot by a single line halfway back in the movie.

This is a tough one to weigh in on. I have to give Altman credit for taking what amounts to a standard 80s teen comedy - one with the potential, based on its source material, to be darker and more challenging than most, but still - and trying to accomplish something a little more meaty and interesting with it. But man, is it all over the place. I can't ding the story too much because the magazine piece that inspired it was more a sequence of events than a coherent story, but the biggest problem here is that as a comedy, it's just not all that funny.

I'll grant this: I wound up laughing twice: when Sponson recommended that the recipient of the machine gun present "try it out on a dog or something," and when O. C.'s grandfather, talking over the main dialogue from another room in perfect Altman fashion, did a callback to a joke from 20 minutes earlier.

This is a better curiosity than it is a comedy. If you're an Altman completest, go nuts, but if you want a real comedy, well, I put two links at the top of this review; follow the one to the magazine story.