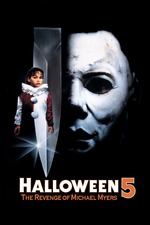 So I made it through jury duty without having to dive into any Loomisisms or resorting to my backup excuse of needing to have labor induced by Thursday, so I figured I'd celebrate with Joe Bob Briggs, The Last Drive In, and what is destined to be the worst of his Halloween marathon: One Of The Two Halloweens From The End of The Slasher Film Era. What the hell; with no jury duty, gotta judge something, right?

So we flash back to that dark and stormy night when the Illinois State Police, the Haddonfield cops, a team of beered-up local vigilantes, and anyone with a gun bigger than a spud shooter put two into Michael Myers and knocked him into a 30 foot hole in the ground? Well, good news, everyone! A wino found him and nursed him back to health! Good for Michael in finding the suburban Illinois wino who won the 1962 winner of the Nobel Prize in medicine, because he not only cures Michael's 77 gunshot wounds, but also his preexisting lazy eye from taking a wire hangar to the face in the first movie.

Cut to Jamie, the little girl from Halloween 4, who is institutionalized like Michael was when he was a kid in the first movie. As she should be, because she totally brutally murdered her foster sister, who (checks script) spends her nights at Jamie's bedside. Guess she got treatment from Michael's Pet Wino. That guy's a pro, unlike Dr. Loomis, a medical professional who thinks tracheotomies are too good for choking members of the extended Myers family. Ask me again why I haven't seen a doctor in 10 years, but spend one to three sevenths of every week hanging out in dive bars. I will live forever.

By the way, Jamie's trauma is of the type that prevents her from speaking, which, purely by coincidence, also cures her acting problem from the last movie. Get her the wino, stat! The first presidential candidate who proposes Wino Treatment for All gets my vote! At least the wino funk will mask the smell of this damn burning toast! But let's get back to the movie.

So Jamie's sister Rachel blithely takes a shower while her dog barks away, as if dogs and naked teenagers are safe as houses on Halloween in Haddonfield. Hey, it's not like someone totally fucking murdered her in the bathtub on Halloween in the last movie or anything! Anyway, that's a wrap for Rachel, the Girl So Nice, Halloween Killed Her Twice.

What's that? Rachel didn't get killed in Halloween 4, the foster mother did? Well, nothing screams quality entertainment like interchangeable victims. That's why Romeo And Ellis From Die Hard is a piece of theater for the ages.

Anyway, with half the people we might remotely gave a shit about dead, now we're following two random teenage girls we have no history with, and whose backstory is WE WANT TO HAVE SEX WITH BOYS IN RACHEL'S HOUSE WHILE SHE'S EITHER OUT OR DEAD. Then they and the aforementioned boys start getting killed and oh my GOD, I just don't care.

Don't get me wrong, I didn't care all that much about Laurie's friends in the first flick, but at least they had Laurie to mourn them. While I thought they were useless, Laurie's care for them made their deaths a little more than a "hold my beer" moment for the practical blood effects guy. The same held true for the characters in Halloween 4, or at least the ones trapped in the house by the end. Sure, they were broader and lamer than their counterparts from the first movie, but at least they felt like more than cardboard cutouts cast off from an early career Madonna video.

I mean, who's there to care about in this movie? Rachel? Sure, but she's dead by the end of act one (and I just regrouped with my SO, and she also swears it was Rachel who Jamie killed at the end of number four. IMDB's gaslighting me). Dr. Loomis? He spends half this movie shrieking at a mute catatonic girl. The mute, catatonic girl? She fucking killed someone at the end of the last movie. This is a confederacy of assholes who deserve to suck the pipe. They're nothing but meat for the beast.

I'm beginning to hate the people of Haddonfield, who wake up every fresh November to a pile of body parts only to forget completely about it within the next 364 days. It's like trying to muster up sympathy for people in a Purge movie who forget that the The Purge happens every year. It's like trying to scare up empathy for your weird cousin who spends 40 years living on lard and cigarettes and spends every family reunion cursing God for the invention of stairs.

I don't want these teenagers to die for wanting to have sex, I want them to die trying to have sex, blue balled and unfulfilled. I want them to escape Michael, go to college, start a dead-end career, marry poorly, and then take a pitchfork to the chest. I want them to realize they ran the winning Powerball ticket through the washing machine, and then get stuffed into the dryer. And with that, the air is completely out of the movie. When you are rooting for The Shape, it's not a Halloween movie anymore, it's just any other slasher flick. We're just waiting for the best kill and the ending, and that's just disappointing, especially considering the surprising watchability of Halloween 4.

By the end, the Doctor who, I am told, tried to blow up a hospital once, is using the little girl who once fucking killed a family member in a bathtub as bait, and we're now living in a Reddit "Am I The Asshole?" thread writ large. You sure are, buddy; I don't care who's asking the question.

Christ, this director even gives us a cop shooting Michael Myers ten times. With a police issue revolver. In 1989. If the director and the editor don't give a shit, then why should I?

Then there's a bunch of sturm and drang, and I guess The Terminator rescues The Shape. Fuck it. Fuck the director. Fuck the screenwriter. Fuck everyone.

I tried to go into this with an open mind because I was pleasantly surprised by Halloween 4, but this was hot garbage. I'm pissed I watched this because I could have gone to bed an hour earlier. Donald Pleasance saves this from half a star.

I had more fun pissing away three hours at jury duty, for Christ's sake.