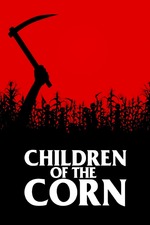 This came out in 1984, at Peak Big Steve King Mania, when I was at the prime age to want to go to a movie like this... and I still never saw it before today because even back then I was still old enough to know that you can't make a decent feature length movie out of a half-dozenish page short story that wasn't even the high point of Night Shift anyway.

So here we are, back in a corn field with Chekhov's Lighter. Let's see if they were any smarter about the purifying power of fire back in 1984.

So you've got your town full of Midwestern Pee Wee League God Botherers who clearly read an article on Jim Jones and completely missed the point. Mix in a couple of yuppies in a strained relationship. Add in a soupçon of Elder God of Boring Kellogg's Cereal, and simmer until we reach our contractually obligated 90ish minute run time. Ask me again why I will never go west of Worcester or south of Warwick.

What we're dealing with here is a movie that wears a bunch of influences on its sleeve. We've got Jonestown in the mass poisoning of Gatlin. We've got that episode of Star Trek where everyone over 18 dies of the Purple Herpes. There's your garden variety insular Lovecraftian cult, only in the Midwest instead of New England (come to think of it, maybe I'd better rethink that whole Worcester / Warwick artificial boundary). And there's good old Kid With a Knife anxiety from John Carpenter's Halloween.

All good influences to be sure, but that's a lot of stuff to deal with, and it winds up being kind of a mishmash. Like, what exactly am I supposed to be afraid of at any given time? Is it the kids, who seem to have been trained as ninjas by someone along the way? Is it High Fructose Cthuhlu? It is the phone company who hasn't made a dime on any of those leased phones for three years and is now pissed? These kids need to realize that when you mess with the pre-split Ma Bell Phone Cops, you face shock and damage. But maybe I'm getting away from myself here.

There is some stuff that works in this movie. True believers who don't listen to reason and want to see how your insides look are gonna be disconcerting, and the flick rides that vibe for its best moments through most of it. But even there we run into problems; Burt gets to give a great, progressive speech about how religion without love is a lie, which is a nice sentiment, but it's hard to fault the kids for their faith in a god that literally walks up to Burt right at the end of his speech and demands a blood sacrifice.

Of course, that god would be a little more intimidating if he didn't look like a kid with bad acne and / or a puppy burrowing under a blanket and / or some of the crappiest animated evil popcorn I've ever seen in my life.

I really don't know what to take away from this movie. It took a short story that was about horrors in the universe that we are incapable of fathoming, and turned it into a parable about how children need their parents, and that all couples should drop everything and commit to care for children, no matter how dirty they are, or how bad a case of scurvy they have from eating nothing but corn for three years.

The kids playing Malachi and Issac were effective because they successfully made me want to knock the Jesus out of them. And again, the flick milked enough anxiety over being hunted by people you can't reason with to keep a certain level of tension. But ultimately there was just too much stuff going on - I didn't even touch on why some first grader would have the power of precognition so long as the Crayolas didn't run out - and I can't say this stuck the landing in any kind of way.

I get why people like this, but I can't say I regret letting the $4.50 I would have spent seeing this in the theaters in 1984 gather interest in the bank for 35 years.