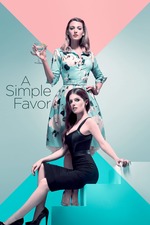 I have nothing in common with this movie. I have no kids, I have no close friends who have kids. Kids might be your future, but they are the ones coming for my job eventually, and I hope parents put away the helicopter instincts and teach them the sheer, lunatic thrill of crossing the interstate between 30 and 15 minutes after 2 p.m. on the Friday of an American three-day weekend. Blindfolded makes the thrills even larger and cheaper!

Or at least that's what I think for pretty much all of act one. This flick starts off with a hyperbolic mommy blogger who knows all the right things to do about kids and who I wouldn't hang out with for all the meth in Arkansas. She meets Blake Lively with a quart of frozen gin, doing her best Bugs Bunny shoulder devil impression. Then Blake disappears, is found in a lake, and what started as a wretched story about a repressed irritant finding herself with a new, outgoing friend turns into a murder mystery.

I haven't seen all the Hitchcock in the world, but I've seen enough to know that director Paul Feig has seen more than me, and has arguably put them all into this movie. You've got your ice queen in white, your insurance take via murder scams, your woman who everyone thinks is dead but who might actually be alive frammis, your passive character that might actually be a brutal multiple murderer, and with Christ as my witness, if I see one fucking bird I am going to lose my shit completely.

There's a twist toward the end of act two that is pretty obvious the minute you see a body come out of a lake. There's a reasonable character development for mommy blogger from simpering milquetoast to proactive wanna-be swindler, all the while knowing that her story might be just as much bullshit as anyone else's.

Once the movie descends a little into the darkness, it's better than I thought it would be during the first act when I thought Anna Kendrick's shtick was on the verge of giving me diabetes. But Paul Feig is no Hitchcock, and he can't resist pulling out of the perfectly serviceable downward spiral he somehow managed to set up and give everyone - including the person who turned out to be the villain - a happy ending.

This is better than I thought was gonna be after the first ten minutes, but to be fair, after the first ten minutes, I thought it was going to suck. It barely keeps you guessing, it miffs the landing, it makes me disdain the concept of motherhood, and it makes me hate YouTube. One star added for giving me the new life goal of throwing seagulls at Anna Kendrick and Blake Lively wherever they appear in public, so they will at least have a sense of what it felt like to be directed by the real master of suspense.